Source: DECR
Natalya Mihailova | 30 September 2015
On September 28, 2015, the book of His Holiness Patriarch Kirill of Moscow and All Russia ‘St. Prince Vladimir: Rus’s Choice of Civilization’ was presented at the new campus of the Far East Federal University on Russkiy Island. The book was published by the Moscow Patriarchate Publishers as part of the His Holiness the Patriarch’s Homily series. 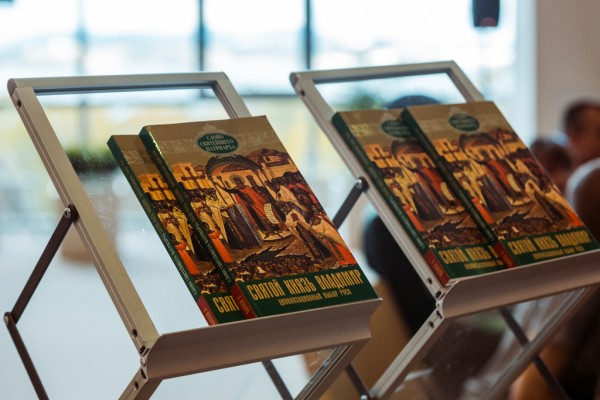 The presentation was made by Metropolitan Hilarion of Volokolamsk. Noting that the book is devoted to the centenary of the demise of St. Vladimir Equal-to-the-Apostles, the hierarch said in particular, ‘This centenary is one of the most significant spiritual events of our time… As His Holiness the Patriarch points out, the celebration brings us back to the sources of our civilization and actualizes the most important meanings in the history of the countries, heiresses of the Old Russia, encouraging us to reflect on the rich heritage handed over by the holy Prince Vladimir. Looking at the past, we as his descendants and spiritual successors should draw lessons for the present and the future’.

Metropolitan Hilarion described St. Vladimir as the most important figure in the history of Slavic nations, Russian, Ukrainian and Byelorussian. The baptism of Russia, he said, radically changed the whole life of Eastern Slavs as the uniting force that predetermined their subsequent history and ‘became the most important unifying factor in the formation of our national self-awareness.’

Speaking about the relevance and topicality of the issues expounded in the Patriarch’s book, Metropolitan Hilarion said, ‘The most important thing that we are lacking today is a conscious, mature and responsible attitude to Christianity. ‘A folkloric and ritual attitude to the faith cannot be recognized as sufficient. In our time, Christianity risks to find itself in a role of though respectful but still an exhibit in the museum of the national-cultural heritage of many countries in the so-called post-Christian world. If we seriously wish that the life-giving Christian ideas may really enrich and transform the life of modern society, we should exert every effort to make people accept and motivate them in their actions and the choice they make in their personal, family, social, public and professional life’.

According to our Primate, he said, the choice of the civilization and the divine truth that Rus made by adopting baptism under St. Vladimir, still continues today, and the Patriarch’s book ‘makes us think over our own choice of worldview, over the meaning of human life, over faith in God and our life in the light of the teaching of Christ’.

Metropolitan Hilarion noted that the range of topics treated by His Holiness Kirill in his book is extremely wide. It includes theology, history, philosophy, psychology and many other themes. It will be of interest to all those who are engaged in educational, missionary, pedagogical and cultural tasks and will make a contribution to the education of the youth for spiritual and moral culture and patriotism.

Before the presentation, Metropolitan Hilarion met with rector S. Ivanets to discuss problems involved in teaching theology in Russian universities, the present state of the university’s chair of theology and religious studies and prospects for its development.