Source: Interfax-religion
Natalya Mihailova | 28 May 2015
Moscow, May 27, Interfax - Patriarch Kirill's of Moscow and All Russia page in VKontakte has become one of the most frequently visited in history of the social net. 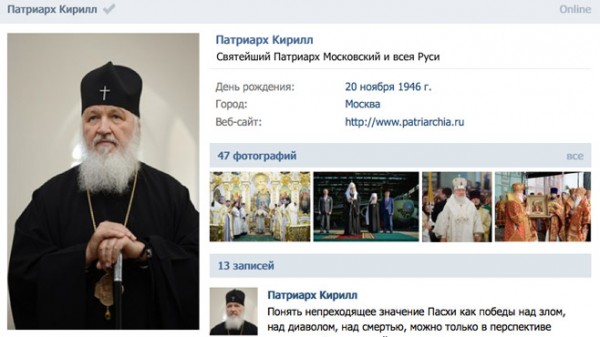 “In the first three days the page was viewed more than a million times, it has more than 82 thousands of subscribers, which is one of the highest results in history of the social net,” VKontakte general director Boris Dobrodeyev was quoted as saying by the press service of the Synodal Information Department.

The patriarchal page was launched on May 24, the Day of Sts Kirill and Methodius.

Head of the Synodal Information Department Vladimir Legoyda told Interfax-Religion that on the first day users of the social net wrote hundreds of thankful commentaries to the patriarch, interesting and constructive discussions on serious Christian topics were initiated in branches under the posts.

Commenting negative reports that appeared at the page, Legoyda said: “the Church has always been ready to the dialogue, and we don’t want to deprive people of a possibility to address the patriarch fearing actions of comparatively few number of net trolls.”

The Synodal Information Department is responsible for the page, its officials will convey the patriarch people’s reaction on his speeches and selected questions.

“It is not planned to post answers at the page, but His Holiness the Patriarch will hear people’s questions and will find a possibility to answer them. It won’t make any sense to open the page without establishing vital links with the audience,” the interviewee of the agency said.