Source: Interfax-religion.com
Natalya Mihailova | 20 May 2015
Ulyanovsk, May 20, Interfax - Patriarch Kirill of Moscow and All Russia after arriving in Ulyanovsk consecrated the stele to commemorate patriarchal locum tenens of war years Patriarch Sergy. 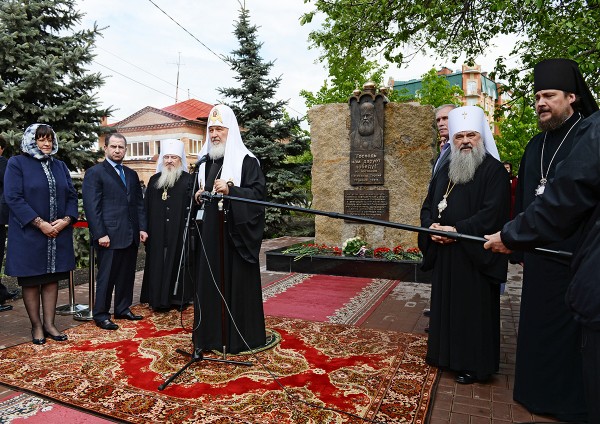 The stele was set up at the place where the Moscow Patriarchate was located in evacuation in the years of the Great Patriotic War. Speaking at the ceremony, the Primate said that it was not by chance that the Patriarchate was moved from Moscow as it was known that Adolf Hitler order to arrest Metropolitan Sergy, future patriarch, in case Moscow is conquered.

“And this order had grounds as each time speaking to people, His Holiness the Patriarch urged people to sacrifice their life and everything they had to protect their Motherland. And these calls reached citizens of the Soviet Union, members of the Russian Orthodox Church,” he said. 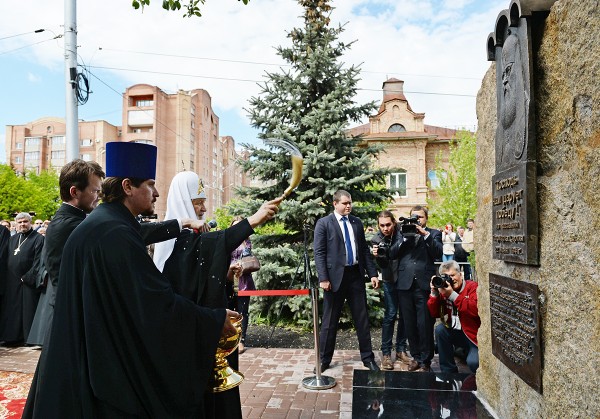 According to the patriarch, when Metropolitan Sergy was in Ulyanovsk he administered the Church from here, “sent ardent calls urging to protect Motherland, collect funds.”

“Despite the difficult material conditions, Orthodox believers fundraised millions of rubles, the tank column and escadrille of military air jets were constructed on their donations, other help was extended to our army,” he reminded.

Patriarch Kirill also visited the obelisk of the Eternal Glory on Wednesday, where he prayerfully commemorated those killed during the Great Patriotic War.

“No one should be surprised that thousands and thousands of people remember their relatives, near and dear heroes, killed in the battle fields. This memory is a part of our national identification, and it is important that it should not be exhausted, but conveyed from generation to generation, and veterans play a great role in it,” he said addressing the participants in the event.