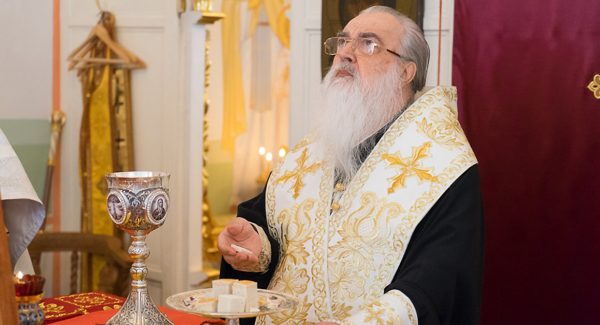 His Holiness Kirill, Patriarch of Moscow and All Russia, noted that a thorough revival of church life in Belarus took place precisely while Metropolitan Philaret was the Primate of the Belarus Orthodox Church, who reposed in the Lord yesterday, January 12.

“With deep sorrow I received the news of the death of one of the outstanding hierarchs, the honorary Patriarchal Exarch of All Belarus, Metropolitan Philaret (Vakhromeev). This is truly a great loss not only for the believers of Belarus, but for our entire Church,” said the Patriarch in his letter to Metropolitan Benjamin of Minsk and Zaslavl, Patriarchal Exarch of All Belarus.

Patriarch Kirill emphasized that the years of archpastoral mission of Vladyka Philaret on the Belarusian land “are marked by a comprehensive revival of church life, the restoration and construction of new churches and monasteries, and the development of spiritual education and educational activities.”

“While following the word of Scripture, in an effort to supervise the flock, not by compulsion, but willingly and piously, and by not dominating the inheritance of God, but by setting an example (1 Pet. 5: 2-3), the newly departed hierarch testified to people with apostolic zeal about the beauty and truth of Orthodoxy, and contributed to the creation of peace and civil harmony on the Belarusian land,” added His Holiness Patriarch Kirill.

In addition, the Primate of the Russian Orthodox Church noted “the significant contribution of the late Metropolitan Philaret to strengthening fraternal ties between Local Orthodox Churches and the development of interfaith dialogue.”

The Patriarch pointed out in particular that, while serving in Europe, as chairman of the Department for External Church Relations, Vladyka Philaret “diligently performed the service assigned to him and acquired sincere love and respect from many people outside his country.”

As a reminder, Metropolitan Philaret (Vakhromeev), Honorary Patriarchal Exarch of All Belarus, died on January 12, 2021 at the age of 85. Vladyka Philaret will be buried on January 15 at the Dormition Zhirovichi Monastery.