Source: Pravmir.ru
Natalya Mihailova | 13 November 2014
November 11, 2014. His Holiness, Patriarch Kirill of Moscow and All Russia, delivered a speech during a meeting of the World Russian People's Council, which is taking place under the slogan “Unity of History, Unity of Russia, Unity of the People”. 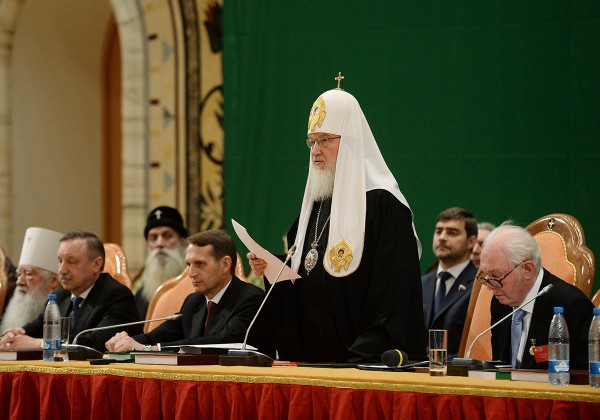 The RIA News Agency has reported that the Primate of the Russian Orthodox Church believes that the modern Russia requires a “great synthesis” of historical periods, which can be described as a formula of “the faith, justice, solidarity, honor, great-power status” – instead of archaic imperialism – “Orthodoxy, monarchy, and community spirit”.

“We should take everything truly important and valuable from various historical periods. We need a great synthesis of high ideals of ancient Rus’, governmental and cultural achievements of the Russian empire, social imperatives of solidarity and collective efforts put into achieving common goals, which determined the life of our society for the largest part of the twentieth century, and also fair aspirations of residents of the post-Soviet Russia. This synthesis means more than the familiar “right – left” dichotomy.

This synthesis can be described as the formula of “the faith, justice, solidarity, honor, and great-power status”, His Holiness, Patriarch Kirill, noted. The Primate of the Church stressed that “the government based on such synthesis will fully represent the ideals of the Biblical Commandments, which are the basic premise of the true understanding of morality, both proper and improper.”

In addition, His Holiness, Patriarch Kirill, denounced strongly those who try to split the Russian history searching its most favorable period. “Today we often hear voices that encourage us to accept some period of our history as a certain model and at the same time to disparage, belittle, and criticize other historical periods of our country in every possible way. In fact, the description of the past of Russia requires a more complicated and colorful palette – a black and white scheme is obviously insufficient,” the Patriarch added.

The Primate of the Church expressed his opinion that similar simplifications not only “create a misrepresented and torn historical picture, which breaks into separate pieces like a broken mirror”, but also repeat the mistakes made by those who “were in pursuit of communism, but instead reached Russia”.

“Despite all reforms, revolutions, and counter-revolutions, Russia has preserved the whole civilizational basis at all times. Many things have changed, including the models of polity, titles of the governors, and the habits of the ruling classes, but the Russian society and Russians have preserved their national identity,” the Patriarch stressed. “Love for the Fatherland, the feeling of fraternity and duty, and the willingness to lay one’s life for one’s friends are the characteristics of the heroes of both, the Kulikovo Field, Borodino, and Stalingrad.”

The Primate of the Russian Church stated that these characteristics of national traits distinguish the majority of Russians today too. “Particularly thanks to them, the Russian nation managed to protect itself, its independence, freedom, and other great values,” the Patriarch concluded.

Most viewed articles
How to Read the Bible160
Words from St. Isaac of Syria112
Seven-day celebrations dedicated to the Saint who helped Bucharest during plague epidemic begin on Thursday110
Patriarch Kirill Encourages the Media to Report Proper and Adequate Information about the Church101
Holy Intercession Church in Glen Cove, NY, Celebrates its 70th Anniversary88
Since the Start of the Pandemic Moscow Priests Have Made Over 4,000 Visits to Patients with COVID-1978
Archbishop Peter of Chicago and Mid-America in an interview to Poltava Diocese’s press service reveals interesting moments in the life of St John (Maximovich)77
“Do Not Weep”25
Best Films of the Pokrov Film Festival Have Been Determined16
Using Our Time Wisely to Cultivate the Seeds of Faith2
Most popular authors
Pravmir.com team360
Archpriest Lawrence Farley160
Archpriest Stephen Freeman112
Aurelian Iftimiu110
Archpriest Peter Olsen25
Priest Luke A. Veronis2