Source: Interfax-religion
Natalya Mihailova | 21 November 2016
Moscow, November 21, Interfax - Patriarch Kirill of Moscow and All Russia is sure that national reconciliation in Ukraine and restoration of fraternal relations between Kiev and Moscow are inevitable. 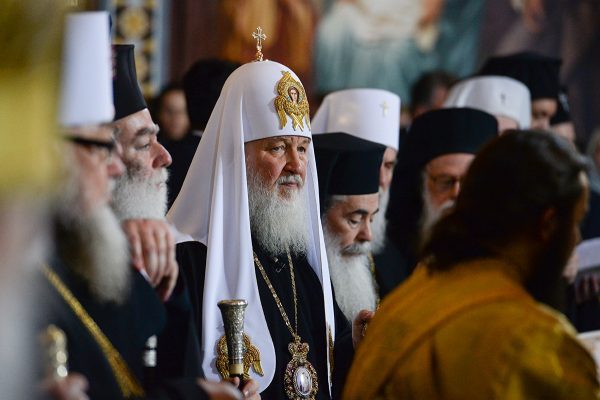 “I believe this reconciliation is not just possible, it certainly will take place because only minority of people are involved in the conflict between Russia and Ukraine, the minority which we see on TV screens, those who march there and pronounce some aggressive slogans against Russia. There also are some Russians who can not stand contemporary Ukraine,” Patriarch Kirill told Interfax-Religion in his interview on the eve of his 70th birthday.

According to him, “if we look to the whole layer of people’s life, it refers to “absolute minority”, to a conflict that “did not touch the depth.” The peacemaking position of the Ukrainian Orthodox Church is based on it, as “the Church knows its flock and addresses its peaceful call both to the East and the West.”

Patriarch Kirill especially hopes for mediation of the Orthodox Church in reconciliation in Ukraine.

“If peacemaking potential of the Church is not destroyed, I think that reconciliation will certainly take place,” the patriarch said stressing that he did not “postpone it until the Roman calends”, he believes “it can happen very quickly as the decease has not touched the depth of people’s life in Ukraine and in Russia.”

Thus, he considers it very important to carry out wise policy, continue peacemaking efforts of the Church and pray for reconciliation in Ukraine, and the Church does it every day. “We believe that the Lord will listen to our prayer, peace will be given to Ukraine and relations between fraternal countries and peoples of Russia and Ukraine will be restored,” the primate said and added that “it is impossible to live without this faith.”

“What does this conflict mean at the background of a thousand years of the joint history?” the patriarch wonders. “We hope and believe that the Lord will grant His mercy to people of Russia and Ukraine, to people whom our Church give pastoral care,” he said.