PRAVMIR, June 9, 2012. Patriarch Kirill of Moscow and All Russia met with family members of Archimandrite Ephraim, Abbot of Vatopedi Monastery on Mt. Athos, on the first day of his visit to Cyprus. The meeting was held at the Convent of St. Heracleidius in the village of Politico, near Nicosia. After a supplicatory service, the Patriarch spoke briefly with Fr. Ephraim’s mother (a sister of the Convent) and his two sisters and four brothers. 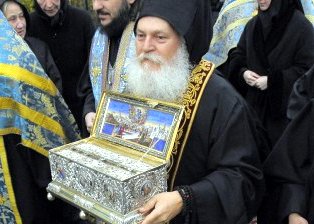 The family expressed their “heartfelt and infinite gratitude” to the Patriarch for the letter he wrote in support of Fr. Ephraim, remarking that they greatly valued the Patriarch’s “worthy and gracious position and active expression of sincere feelings” towards the abbot and the brotherhood of Vatopedi. In reply, the Patriarch stated: “My position is the normal and natural one that any Orthodox Christian would express in such a situation. We ought to endure with dignity and Christian patience all the sorrows and trials that God sends us, just as Fr. Ephraim has.”

Fr. Ephraim gained particular fame in Russia when he brought the Belt of the Theotokos for veneration in 2011. More than three million people venerated this Belt in various Russian cities, many standing for days in lines reaching for miles.

Fr. Ephraim was arrested by Greek police soon after his return from Russia and held in connection with a case involving real estate transactions. Both the Russian Minister of Foreign Affairs and the Patriarch expressed their support for Fr. Ephraim, who was later released on bail.

As he entered the convent church, the Patriarch was greeted with the swinging of the polycandelon, a local tradition for welcoming particularly important and respected guests. The Convent of St. Heracleidius is the largest in Cyprus. It was named after the Hieromartyr Heracleidius, Bishop of Tamasos, who accompanied the Apostles Paul and Barnabas on their missionary journey through the island.

The convent has had a long and complex history. It was destroyed by the Arabs in 806, becoming desolate more than once during the Middle Ages. After its revival, the convent was again destroyed during the Greek War of Independence in 1821. As a result of repressions inflicted by the Turkish authorities, the convent was once again left desolate and, by the middle of the nineteenth century, had become an ordinary parish church. The convent was revived in 1962 with the blessing of Archbishop Makarios III.

Most viewed articles
The Authenticity of the Vision of Christ in the Life of Saint Silouan111
Epistle of the Council of Bishops of the Russian Orthodox Church Outside of Russia89
“A New Creation” Through the Cross of the New Adam58
The Bulgarian Church Can Canonize Its First Patriarch41
Living with Cunning People37
“The models par excellence are the great hesychast saints,” says Romanian Orthodox Bishop of Oradea34
The work of the Church in society is quiet, but full of hope and love, says the Director of Lumina Publications21
Most popular authors
Pravmir.com team130
Archimandrite Zacharias Zacharou111
Priest Philip LeMasters58
Ștefana Totorcea55
Fr. Andreas Agathokleous37