Source: Interfax-religion
Natalya Mihailova | 30 May 2016
Athos (Greece), May 30, Interfax - Patriarch Kirill of Moscow and All Russia met with Russian President Vladimir Putin in Russian St. Panteleimon 's Monastery on Athos on Saturday and thanked him for state participation in the revival of the Athos monastery. 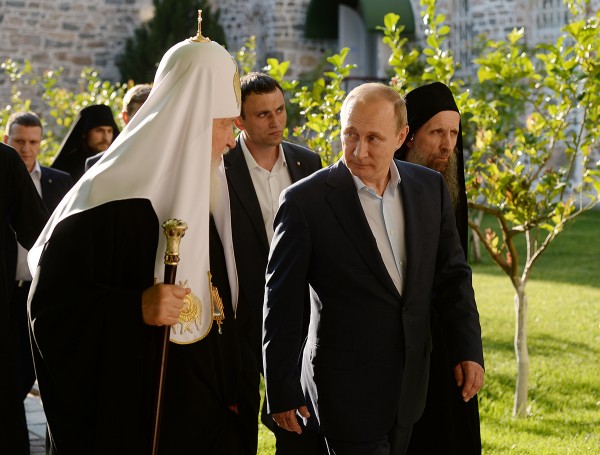 “Special changes [in the situation of Russian monks on the peninsula] took place in the past few years. You know about these changes because a lot of what happened happened on your initiative and with your support,” the patriarch said.

“The Russian state has actively joined the preparations for the 1,000th anniversary of Russian presence on Athos, a fund was created, a relevant church and state structure was created, and it has done a lot of restoration, construction and rebuilding work,” he said.

The patriarch recalled that Athos’ hopes for a calm and peaceful life used to be connected to Russia and the people of Russia, but all ties were severed after the 1917 revolution and only some of the brethren of the St. Panteleimon’s Monastery eventually survived.

“It was all like a ghost, some of the buildings were burned and some were desolate,” the patriarch said about his first visit to Athos in the 1970th.

He recalled that Russian presence on Athos is now reviving. “More and more our monks, pilgrims, and laborers come here, very many wealthy, Orthodox people, seeing the need of this place, are responding with their hearts to the sad situation of Russian monks and are bringing their gifts here, and not only to the Russian monastery, to all monasteries on Athos, as was common before the resolution,” the patriarch said.

He congratulated the president of the 1,000th anniversary of Russian monks’ presence on Athos. “I again want to thank you and the whole Russian state that you represent, in your presence, our wonderful benefactors, good people, who, along with the state, with the church have done everything to rebuild the monastery,” he said.