Source: DECR
Natalya Mihailova | 18 February 2016
On February 17, 2016, His Holiness Patriarch Kirill of Moscow and All Russia visited the Bellingshausen Station on Waterloo Island in Antarctica. 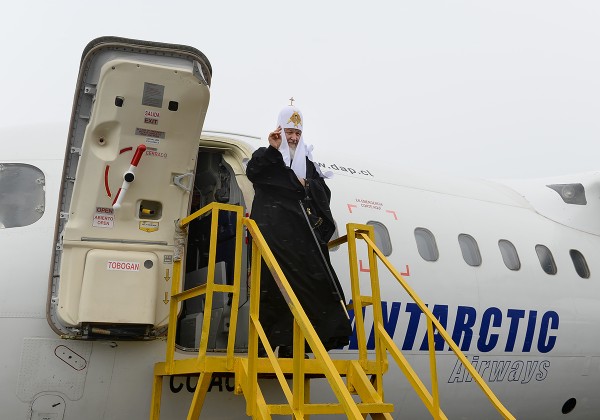 The plane carrying the patriarch and his party took off after 7 o’clock in the morning, local time, from Punta Arenas, Chile, where it stopped for service on its way from Paraguay. It is the southernmost city on the South American continent and the departure point for expeditions for Antarctica.

‘At present, we begin preparing for the celebration of the 200th anniversary of the discovery of Antarctica by the Russian South Polar Expedition (1819-1821) commanded by Faddey F. Bellingshausen and Mikhai P. Lazarev. The expedition sloops Vostok and Mirny reached for the first time the costs of an unknown sixth continent on January 28, 1820, and Russian seamen became the first people on our planet to see, describe and map the unknown costs. This great geographic discovery enabled Russia to assert herself as one of the leaders of the world community in the exploration of the remote icy continent.

‘For the polar explorer who work at the Bellingshausen Russian Station today, the Russian Orthodox church of the Holy Trinity, which is a Patriarchal representation, is of great importance as a little island of our native land in this remote part of the planet. 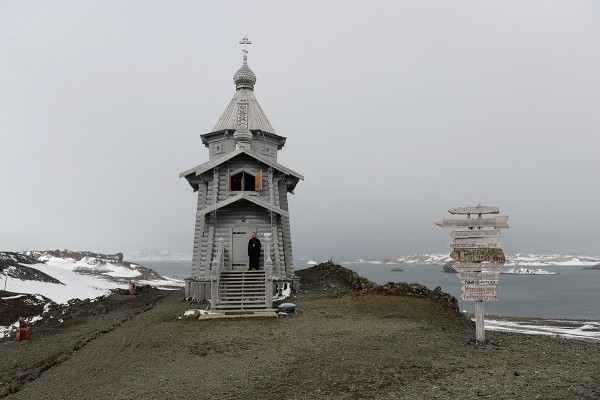 ‘We are aware of how much time Your Holiness gives to the pastoral care of his flock both inside and outside Russia. Your prayers and pastoral word extend to the remotest parts of the planet where the faithful of the Russian Orthodox Church eagerly await them. Having learnt about your intention to visit Latin America, we wholeheartedly invite you to visit, if possible, our Bellingshausen Station in which your compatriots have been on work watch since 1968. For us it is especially important in anticipation of the glorious jubilee of the Russian discoveries in Antarctica. We ask your Primatial prayers for all the Russian polar explorers who work in the land of Antarctica’. 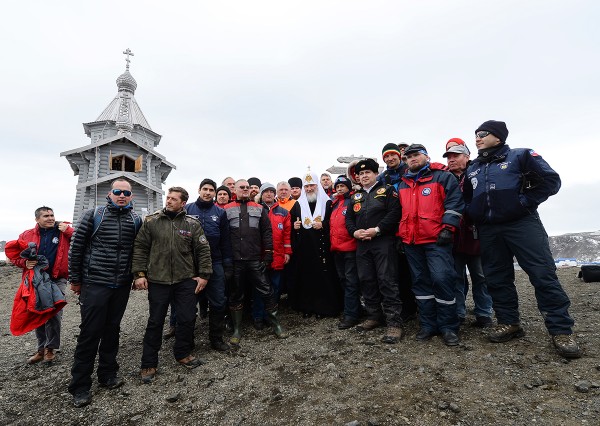 Upon his arrival at the Bellingshausen Station, His Holiness celebrated a thanksgiving with the blessing of water at the Orthodox church of the Holy Trinity, the only stationary church in Antarctica. During the thanksgiving, prayers were lifted for the good health of all those who work at the station.

After that, Patriarch Kirill led the congregation in prayer for the repose of the souls of ‘the dead servants of God who died in this place and worked here for the glory of our Motherland’. During the exploration of Antarctica, 64 Russian polar explorers died. 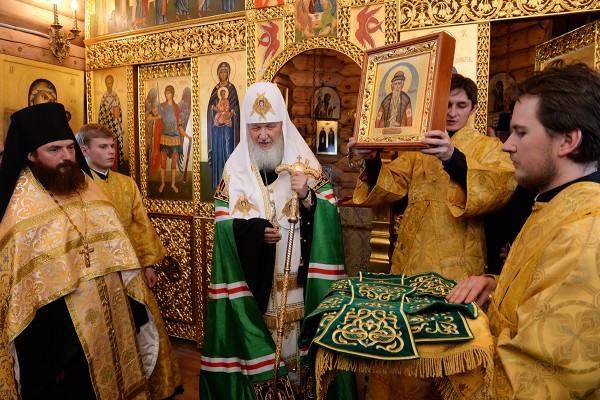 His Holiness was assisted by Bishop Kallistrat of Gorno-Altaysk and Chemal, who was the first priest to serve at the station after the Holy Trinity church was built there in 2004, and Hieromonk Veniamin (Maltsev), who takes pastoral care of the Russian expedition members at present.

The liturgical hymns were sung by the clergy choir of the Moscow diocese, conducted by the Rev. Sergiy Golev.

After the thanksgiving and office for the dead, His Holiness Kirill delivered a Primatial homily.

In memory of his first visit to Antarctica and the Holy Trinity church, Patriarch Kirill presented the parish with an icon of St. Vladimir Equal-to-the-Apostles and embroidered shrouds.

Then His Holiness was taken on a tour of the station. In the common hall, he had a talk with the expedition members and numerous researchers of Chilean, Chinese and other expeditions, who came to meet the Primate of the Russian Church.

The head of the station, V. Cheberdak, greeted Patriarch Kirill on behalf of the polar explorers.

His Holiness gave to each one a small icon of St. Vladimir Equal-to-the-Apostles with his blessing and a collection of his sermons.

‘Bellingshausen’ is the Soviet-Russian Antarctic station on the King George (Waterloo) Island. It is named after Faddey Bellingshausen (1778-1852), a Russian seafarer, admiral and the discoverer of Antarctica. It was founded by the Soviet Antarctic Expedition on February 22, 1968. It is the northernmost, that is, the closest to the equator, Russian Antarctic station. As of 2015, there are eight year-round and five seasonal specialists working at it.

The Chilean Antarctic expedition ‘Frei’ (Presidente Eduardo Frei Montalva) is located in the immediate vicinity of the Bellingshausen Station.

The idea to build a permanent church in Antarctica was put forward in the 1990s by the head of the Russian Antarctic Expedition (RAE), Valery Lukin and the captain of the Metelitsa women’s team, Valentina Kuznetsova. It was supported by His Holiness Patriarch Alexy II. The Church in Antarctica Foundation was established at the same time.

The church was designed by Svetlana Rybak and constructed by Alexander Schmidt. It was built of cedar and larch logs by a team of carpenters from Gorno-Altaysk at the Kyzyl-Ozek village. The building was let ‘settle down’ for a year; then it was disassembled and transported by trucks to Kaliningrad and from it to Antarctica, where it was re-assembled by an 8-member team of within 60 days. The wooden carved iconostasis was made by masters from Dmitrov near Moscow. A small residential house was built close by for the clergy.

Hieromonk Kallistrat (Romanenko), now Bishop of Gorno-Altaysk and Chemal, who was at that time a monk of the St. Sergius of the Trinity, was the first rector of the Antarctic church. He spent over a year on the island and left for Russia in March 2005.

Since that time, the Monastery’s monks, just as the researchers, have relieved one another every year. The duties of a priest include the pastoral care of the staff of the Russian and other nearby stations, including the commemoration of the 64 Russian polar explorers who died researching Antarctica. 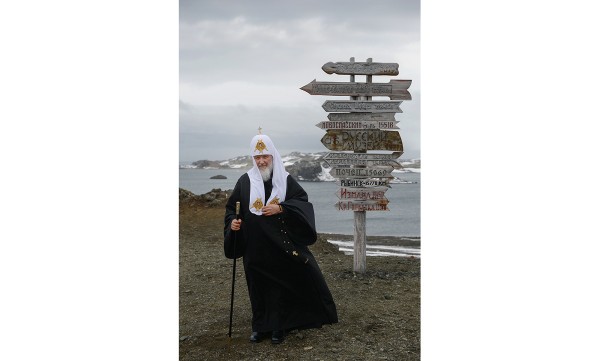 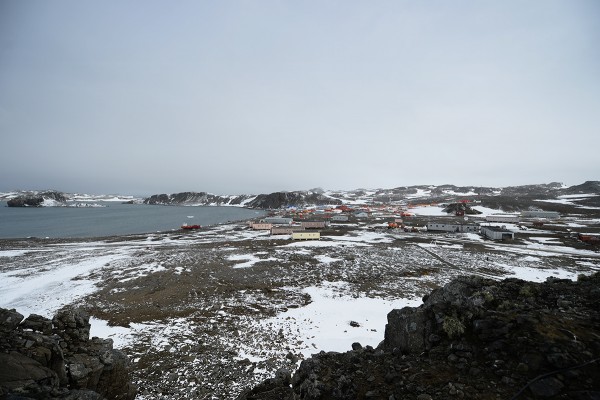 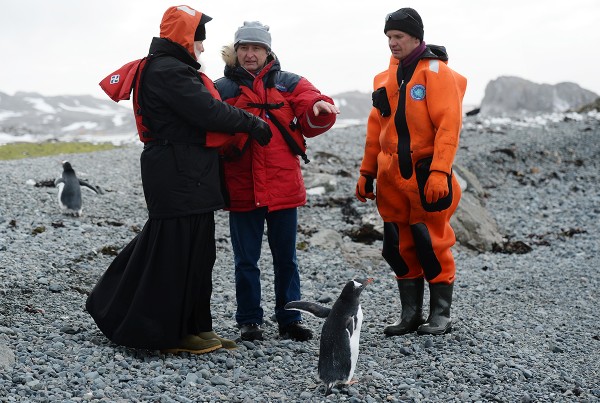 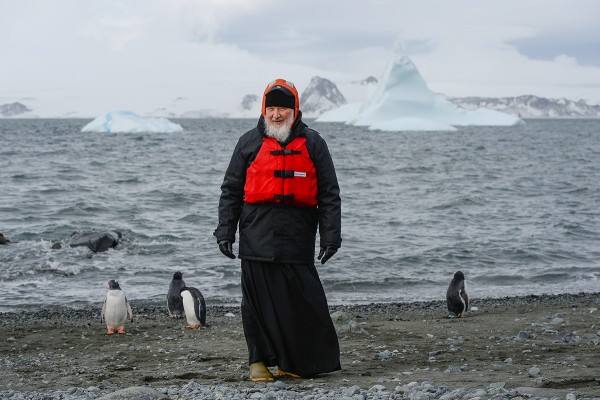 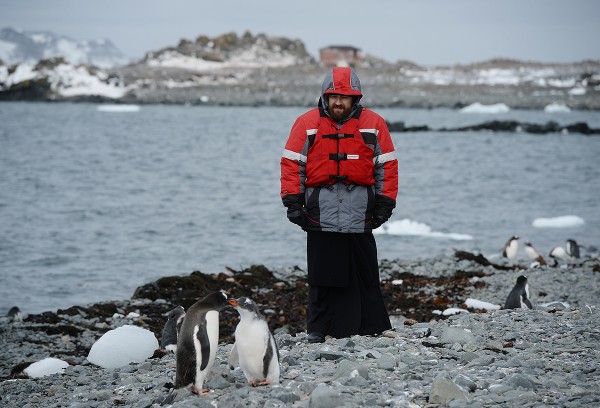