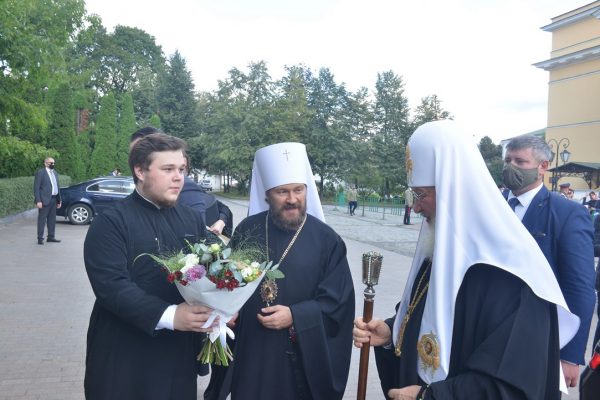 On September 12, 2020, after the Divine Liturgy at the Cathedral of the Trinity in St. Daniel Stauropegial Monastery, His Holiness Patriarch Kirill of Moscow and All Russia visited the Department for External Church Relations of the Moscow Patriarchate.

At the entrance, His Holiness was met by DECR chairman Metropolitan Hilarion of Volokolamsk and DECR vice-chairmen Archbishop Leonid of Vladikavkaz and Alania, Archpriest Nikolay Balashov and Archimandrite Philaret (Bulekov).

The Primate of the Russian Orthodox Church saw the memorial corner devoted to the late Metropolitan Nikodim of Leningrad and Novgorod, the second chairman of the department.

Then His Holiness proceeded to the DECR chairman’s office for a meeting with Metropolitan Hilarion. The Primate congratulated His Eminence on the 25th anniversary of his work at this synodal department responsible for the external relations of the Russian Orthodox Church and wished him God’s help in his further work.

Opening the meeting, the DECR chairman noted that as the present pandemic situation made it impossible to assemble all the members of the department, it was decided to limit the assembly to its senior members.

Greeting those present, His Holiness said, ‘Brothers, I am very glad to meet with you especially in these walls which I hold so dear’.

His Holiness noted that he crossed the threshold of the department with a very special feeling because he had worked in it as its chairman for almost twenty years.

Patriarch Kirill also shared his memories of the time when he had worked at the department to which he related since 1968. He recalled that he had been the youngest participant in the major international inter-Christian congress – the 4th General Assembly of the World Council of Churches, which took place in 1968 in Uppsala, Sweden.

His Holiness shared his reminiscences saying, ‘Just imagine, a Russian Orthodox young man finds himself in this excited atmosphere of a major international organization. Of course, it was a great, as it would be put nowadays, psychological challenge. But beside me were people who could help me to grasp the situation – these were the late Metropolitan Nikodim, Metropolitan Juvenaly and our other outstanding hierarchs who took part at that time in the international work. As a matter of fact, this was the beginning of my cooperation with the Department for External Church Relations, which was located at that time in a mansion in Ryleyev Street’.

‘I am glad to visit this department to which I had given twenty years of my life as chairman and much longer as a co-worker and to see how well everything is developing, how well the work is organized and how highly qualified are those who are working here’, he noted.

Patriarch Kirill wished God’s help to all the staff members of the department and said that ‘each epoch bears an emotional and intellectual charge; each epoch demands a special efficiency. And may God give that the present generation of the staff members cope with today’s challenges with an even greater success than the previous ones achieved’.

Metropolitan Hilarion, in his turn, thanked His Holiness on behalf of those present. ‘I would like to assure Your Holiness that the Department for External Church Relations are people faithful to you and faithful to the church cause’, he said.

In conclusion of the meeting, His Holiness presented each participant with commemorative gifts.