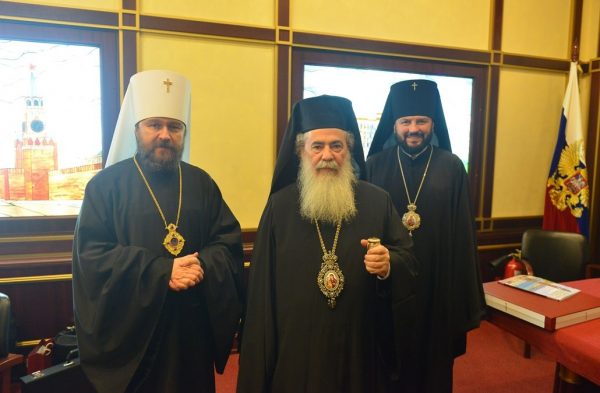 On November 21, 2019, the Primate of the Orthodox Church of Jerusalem completed his stay in Moscow. During his visit, His Beatitude Patriarch Theophilos III of Jerusalem was accompanied by Archbishop Aristarchos of Constantina and Archdeacon Mark (Henderson).

During his visit to the Russian Orthodox Church, His Beatitude, together with His Holiness Patriarch Kirill of Moscow and All Russia, celebrated the Divine Liturgy at the Church of Christ the Saviour on the Day of the Synaxis of Archangel Michael and Other Heavenly Bodiless Powers.

On the same day, at the Church Councils Hall of the Church of Christ the Saviour, His Beatitude Patriarch Theophilos was presented with the Patriarch Alexy II’s Prize “For Outstanding Work to Strengthen the Unity of Orthodox Nations and for Asserting an Promoting Christian Values in the Life of Society”, established by the International Public Foundations of the Unity of Orthodox Nations”.

On the day before, November 20, a meeting took place at the Moscow Kremlin chambers between the President of Russia and the Primates of the Orthodox Churches of Jerusalem and Russia.

At Sheremetyevo airport, His Beatitude was seen off by chairman of the Department for External Church Relations (DECR) of the Moscow Patriarchate Metropolitan Hilarion of Volokolamsk, DECR vice-chairman Archbishop Leonid of Vladikavkaz and Alania, DECR protocol section director Hegumen Feofan (Lukyanov), and DECR secretary for inter-Orthodox relations Archpriest Igor Yakimchuk.