Patriarch Laham: We will not forget and pray for the abducted bishops

Source: Herald Malaysia Online
Natalya Mihailova | 21 April 2016
The Christian community in Syria "has not forgotten" its bishops, because "every time we hold a joint prayer meeting we talk about them, we think of them." 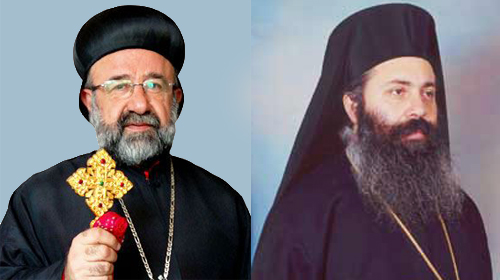 DAMASCUS: The Christian community in Syria “has not forgotten” its bishops, because “every time we hold a joint prayer meeting we talk about them, we think of them.” In recent days “a celebration was held in Beirut”, and the same will happen today, “at the Greek-Orthodox Patriarchate”, in the Lebanese capital, Melkite Patriarch Gregory III Laham, tells AsiaNews, commenting on the three years since the kidnapping of Msgr. Yohanna Ibrahim and Msgr. Boulos Yaziji in Aleppo, in northern Syria.

Since April 22, 2013 there has been no news of the two prelates of the Syro-Orthodox and Greek-Orthodox church, whose fate remains shrouded in mystery. There abduction was “abnormal” because it was never followed up with claims or concrete negotiations to obtain their release. A serious blow to these Churches of the East, a symbol of interfaith dialogue, spiritual and intellectual enrichment for the region.

Msgr. Yohanna Ibrahim, bishop of the Syriac Orthodox diocese of Aleppo and Msgr. Boulos Yaziji, Archbishop of the Greek-orthodox diocese were kidnapped before 6 pm in the village of Kafr Dael, about 10 km from Aleppo. According to witnesses the two prelates were negotiating the release of two priests Fr. Michel Kayyal (Armenian Catholic) and Fr. Maher Mahfouz (Greek-Orthodox), seized in February of that year.

After they arrived at the rebel militias road block, the car carrying the two bishops was flanked by armed men, maybe Chechen jihadists, who opened fire on the vehicle, killing the driver deacon and seizing the prelates.

Evidence gathered in the hours following the kidnap appeared to show that the group was made up of foreigners who did not speak Arabic. However, from that moment on the entire episode has been shrouded in silence. None of the rebel groups has claimed the abduction and to date there is no information about the fate of the two bishops, metropolitans of Aleppo, or if they are still alive.

For this reason, the Syrian Orthodox Church and the Greek Orthodox Church organized a prayer meeting entitled “We do not forget”, which was held on April 19 in Beirut with the aim of keeping the memory of the two religious leaders alive. The function was attended by political and religious leaders of Lebanon and the Middle East. These included president of the Syriac League, Habib Ephrem, who stated that “nobody cares about this kidnapping.” Former government minister Faycal Karami had even harsher words and said that the kidnapping was “a premeditated act”, a “message” to Christians to tell them to “leave the region”, which he believes hides “the hand of Israel” even if the perpetrators are Muslim extremist groups.

Speaking to AsiaNews, Syrian, Patriarch of Antioch and All the East, Gregory III, confirmed that “three years have passed and we know nothing of their fate” and so far any information they have received “has no basis, there is no real or credible news”. It is “impossible”, he confirms, to obtain “definite information.”

“What we can do – continues the prelate – is to renew the call to prayer, so that there is a general, international mobilization for peace in Syria”. The hope, he adds, “is that their fate and their suffering is a reminder, an appeal to the world for peace. That these two martyrs are a sign of the future, a Cross on the path of the Syrian people. ”

The Melkite Patriarch strongly affirms that Msgr. Yohanna Ibrahim and Msgr. Boulos Yaziji “will not be forgotten” and “whenever we come together to pray, we talk about them.”

A long standing critic of Western (and regional) powers’ intervention first in Iraq and then in Syria, which he believes has only exacerbated the conflict, Gregory III hopes that “the world take interest in this matter, to take charge of the Syrian crisis, the drama of the faithful and of the nation’s people as a whole”. This anniversary, he concludes, “I hope will be the occasion to launch an appeal for peace. We need a universal alliance for peace, not US, Arabic or Russian. What is required is a willingness to advance the talks and find a common point. Instead, there are those who attack, who want chaos, to feed the money markets, the arms markets, to feed personal interests … Someone is making a lot of money out of this war!”.