Source: DECR
Natalya Mihailova | 28 May 2014
On May 27, 2014, His Holiness Patriarch Neophyte of Bulgaria, while on an official visit to the Russian Orthodox Church, arrived in St. Petersburg from Moscow. 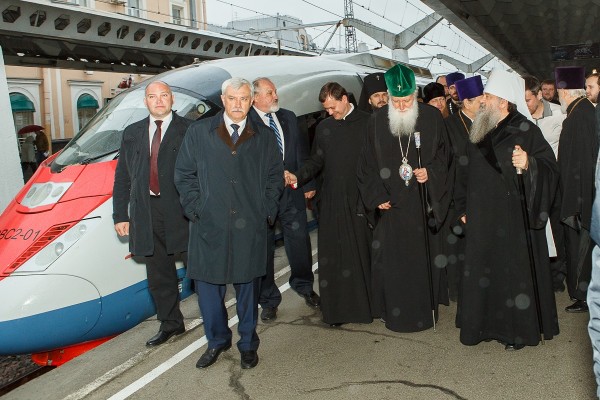 At the Moscow Railway Station, the Primate of the Bulgarian Orthodox Church and his retinue were welcomed by Metropolitan Varsonofy of St. Petersburg and Ladoga, chancellor of the Moscow Patriarchate, Archbishop Ambrose of Petergof, Bishop Nazary of Kronstadt, St. Petersburg clergy and Governor Poltavchenko and city officials.

On May 28, the Bulgarian delegation will visit the Alexander Nevsky Laura of the Holy Trinity, Novodevichy Convent of the Resurrection, St. John of Kronstadt Convent and St. Petersburg Theological Academy.

On May 29, the Day of the Ascension, the Primates of the Russian and Bulgarian Orthodox Churches will celebrate the Divine Liturgy at the Cathedral of Our Lady of Kazan in St. Petersburg.

Later that day, His Holiness Neophyte will say the Office for the Dead at the Ss Peter and Paul Cathedral at the grave of Emperor Alexander Nikolayevich, the Liberator Tsar, who is commemorated at each Divine Liturgy in Bulgarian churches.