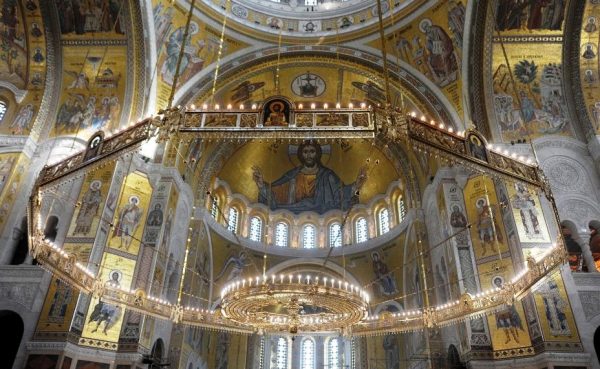 In his interview to International Life magazine, His Holiness Patriarch Porfirije of Serbia expressed his gratitude to the Russian Orthodox Church for participation in adorning the Cathedral of St. Sava in Belgrade and the restoration of the shrines affected by the earthquake in Croatia in 2020-2021.

His Holiness Patriarch Porfirije stated that the Cathedral of St Sava is a temple that is cherished by all the Serbian people. He mentioned that the history of this church “began in the 16th century when the Turks burnt down the relics of our greatest hierarch, and our people promised to erect their largest church at the place where it happened”.

Many centuries and countless benefactors have gone down the history of the building of the St. Sava Church, the Primate of the Serbian Orthodox Church said, “Taking into account the intertwined histories of Russia and Serbia, it would have been surprising if the Russians had not played a considerable role in this great Serbian initiative for the glory of God. All of us are very grateful to His Holiness Patriarch Kirill and to the whole Russian Orthodox Church for the help thanks to which the works were begun for adorning the interior of the Church of St. Sava”.

His Holiness Patriarch Porfirije also pointed out that the President of Russia, Vladimir Putin, during his first visit to this church in 2011, showed interest in the contribution of the Russian people and the Russian State to the fulfilment of the promise given by the Serbian people in the 16th century. Having thanked the benefactors and the painters from Russia who were engaged in creating the fresco decoration, the Patriarch said, “Today, this stage in the construction has been completed as well. We are only to celebrate the Great Consecration of the church and after that we will be able to say with peace in our souls: we, Serbs, have fully fulfilled the promise we gave to our greatest hierarch and enlightener St. Sava”.

Another example of the fraternal help of the Russian Orthodox Church is her concern for the restoration of the shrines affected during a series of destructive earthquakes in Croatia. “Some churches were fully destroyed, while in others divine services could not be held because of the risk of collapse”, this is how His Holiness Patriarch Porfirije described the situation caused by the natural disaster.

“A year after the earthquake, thanks to the loving participation of many people, churches and houses of our faithful began to be restored. But the process is not going sufficiently fast. We are especially grateful to the Sister Russian Orthodox Church, which was one of the first of those who offered help and fully took upon herself the restoration of the Church of the Nativity of the Most Holy Mother of God in the city of Glina”, the Primate of the Serbian Orthodox Church said.

He stressed, “This church, just as the city of Glina itself, a place of terrible, indescribable sufferings of thousands of Orthodox Christians in the years of World War II, is of special significance to us”.