Patriarch Sako on Christian Persecution: ‘Is This Not a Crime Against Humanity?’

Source: Assyrian International News Agency
Edward Pentin | 03 January 2016
ROME -- "In one night, 120,000 Christians left their homes just with their clothes and have been living in camps for one and a half years. Is this not a crime against humanity?" 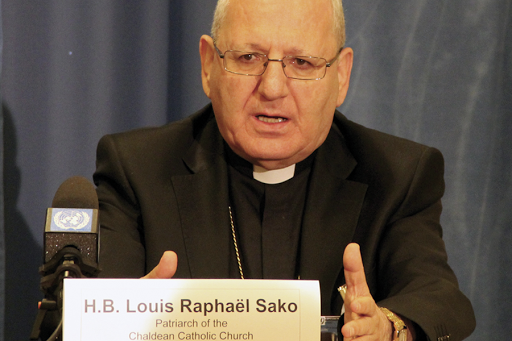 His Beatitude, Louis Raphael I Sako, Patriarch of Baghdad of the Chaldeans, spoke of this and other serious hardships and persecutions against Christians, at a recent Rome conference on religious freedom.

His accounts were just some of a growing number of harrowing accounts coming out of the Middle East matched by increasing calls upon fellow Christians in the West to act.

So extensive and brutal has the persecution become that calls have been increasing in the U.S., the European Union and the U.K. to classify the atrocities taking place there as genocide.

As well as the humanitarian emergency and forced displacement caused primarily by the brutality of the jihadist group Islamic State (ISIS), Patriarch Sako also mentioned other facts regarding persecution in Iraq not widely known.

These included the approval in October of a law in the Iraqi parliament to forcibly convert to Islam children who are Christian, Yazidi and Sabean if one of the parents proclaims to be Muslim, and the advance of political Islam in which sharia (Islamic law) doesn’t allow non-Muslims to participate in politics and have equal constitutional rights as Muslims in administration.

ISIS leaders, he said, have established three “rules of trade” with non-Muslims: “forcing people to convert to Islam, to pay a tax (jizya) or leave their house, or be beheaded.”

He further pointed out that the numbers of Christians in Iraq has collapsed, falling from 1.4 million before the collapse of Saddam Hussein’s regime to currently 500,000.

“Today, everything in Iraq has become sectarian,” said Archbishop Sako. “Daesh/ISIS and extremists attack Christians, Yazidis and Sabeans because of their belief. They destroy anything that does not fit into their vision of Islam.”

At the same Dec. 10-12 conference, called “Under Caesar’s Sword” and hosted by the University of Notre Dame’s Center for Civil and Human Rights, Archbishop Paul Gallagher, the Holy See’s secretary for relations with states (commonly referred to as the Vatican’s “foreign minister”), said a number of studies have suggested that Christians are the victims of 80% of all acts of religious discrimination in the world. “What’s more, for various reasons, it seems to go largely unreported.”

But the archbishop noted “a much more important reason” why the Church should focus on Christian persecution: As Christians, he said, “we have a special duty in charity to our fellow Christians” to show them “solidarity” and come to their aid.

It’s true, said Bishop Anba Angaelos, general bishop of the Coptic Orthodox Church of Alexandria and head of the Coptic Orthodox Church in the U.K., that as Christians we are called to “embrace and accept out persecution thankfully,” but all Christians also have a “moral responsibility to be advocates, speaking for those who cannot speak, to be a voice in the wilderness.”

Noting a gradual “pushing of boundaries” leading to what now amounts ethnic cleansing of Christians in the region, he warned that “our silence is a contributing factor” that “must be changed.”

“There is a growing disregard for the sanctity of life, and that must be what offends us,” he told the conference. “It is not about Christians or Muslims being killed, but about life and humanity as God’s creation, and that disregard is a violation that we cannot be silent about. In response we must realize that we have to respond together, collaboratively.”

Bishop Angaelos warned against Christians becoming “desensitized” to the suffering. “It’s not enough to empathize with them,” he said. “We must act. [We] should never let our conscience say: ‘It’s okay, they’re not dying.’ The sanctity of life is not a statistic but reality for each and every person.”

Remembering the ransacking of dozens of churches in Egypt in August 2013, which he believes was a coordinated attack, he resented the fact that in response Christians around the world “did absolutely nothing.” He recalled someone commenting at the time: “There was no memo from head office to say ‘don’t react.'”

So what should be done? Patriarch Sako listed several concrete proposals which included first of all destroying ISIS militarily with “troops on the ground.” ISIS must also be destroyed ideologically, he said, “drying up the funding, weaponry” of the jihadists and “condemning and eliminating” sectarianism and “all other forms of hatred and violence.”

He also advocated political reform underpinned by the principle of “citizenship and equality” that allows Christians and other religious minorities to be full citizens rather than “protected minority status”. He called for a separation of religion from the state, and the criminalizing and punishing contempt for religion and the spread “hatred and division.” Islamic religious authorities, he said, must dismantle jihadist ideology and replace it with promoting “a culture of harmonious social existence,” and the international community should “issue decrees” through the U.N. against those committing injustices against religious minorities.

Bishop Angaelos called for a change in the whole way discourse is conducted. “We should not merely talk about provision but prosperity, not about protection but safety, or about survival but dignity,” he said. “These should be the baseline of our efforts.”

Archbishop Gallagher called on the faithful to better educate themselves about the persecution so that they can be more open to their plight. He was particularly pleased that research by the “Under Caesar’s Sword” initiative would be used to “sensitize schools and churches” about persecuted Christians.

As well as prayer, he also advocated a redoubling of humanitarian efforts.

It’s necessary to “open our hearts” to the testimonies of persecution, he said, in order to have a “profound spiritual solidarity” with the suffering.