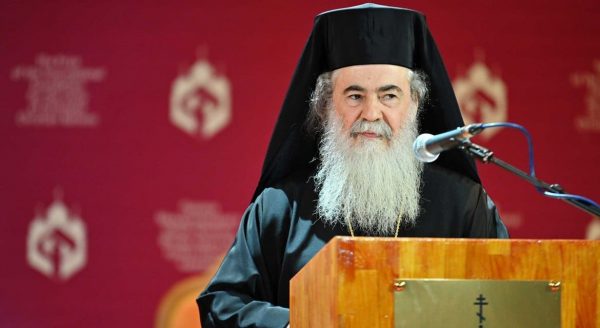 His Holiness Patriarch Theophilos III of Jerusalem and All Palestine once again stated that extremist Zionist groups want to draw out Christians from Jerusalem and other parts of the Holy Land.

“Christians have become targets of repeated attacks by radical Zionist groups, especially in the Holy City,” said the Primate of the Jerusalem Church on December 21, 2021, during his meeting with King Abdullah II of Jordan, reports the website of the Department for External Church Relations of the Moscow Patriarchate.

Patriarch Theophilos III spoke about the need to tell the world about the threats to the holy places of Christians and Muslims as a result of the ambitions of radical Judaist groups in the absence of a serious attitude of the Jerusalem authorities to the issue of protecting these holy places.

“Since 2012, countless crimes have been committed against Christians, including physical and verbal attacks on priests and other clerics; temples were attacked, holy places were vandalized and systematically desecrated. And this is in addition to the constant intimidation of the Christian population, and after all, all they want is to live a normal life, since God gave them this right,” said the Patriarch.

At the same time, the Primate of the Jerusalem Church expressed confidence that such actions of radical groups are dictated by the desire to expel Christians from Jerusalem and other parts of the Holy Land.

“We are raising our voices during these Christmas days in order to confirm that the Holy Land is not only the land of Christ’s birth, but also the land from where Christianity spread throughout the world,” said Patriarch Theophilos III on behalf of the Jerusalem Church, as well as the patriarchs and heads of other Christian Churches in Jerusalem.

Emphasizing that “the entire Christian world is responsible for ensuring that Christians continue to live on the Holy Land and in the East as a whole,” His Holiness Patriarch Theophilos III concluded that all Christians concerned about this issue are now working “hand in hand to implement sustainable development projects to preserve the deeply rooted Christian presence in Jerusalem.”

Recently, Patriarch Theophilos III of Jerusalem has at least twice reported on the danger of Christians being expelled from Jerusalem and the Holy Land in general. Thus, he talked about this on December 9 during an event at the Jaffa Gate Square in the Old City in Jerusalem. In addition, the same is stated in the joint statement of 13 Christian Patriarchs and heads of the Churches of Jerusalem, issued on December 13, 2021.

Most viewed articles
Patriarch Daniel explains why the Hesychasts were the most sought-after spiritual fathers and what is a prayerful reason142
The Trap of Religiosity121
Bishop Nicholas of Manhattan visits Holy Cross Monastery in West Virginia87
Why Everything Is Important (but not the stuff you might imagine)82
Condolences of Patriarch Kirill over the death of believers in the fire that broke out in Abu-Seifein Church in Cairo51
25 Years of Help: the Ship-Church Goes On its 25th Voyage to Distant Villages51
St. Tikhon Church to host Liturgical Music Symposium in October 202245
The Transfiguration – Glory and Sacrifice27
Ukrainian Church Celebrates Metropolitan Onuphry’s 8th Anniversary of His Enthronement25
Most popular authors
Pravmir.com team259
Aurelian Iftimiu142
Vasileios Stoyiannos121
Archpriest Stephen Freeman82
Priest Luke A. Veronis27