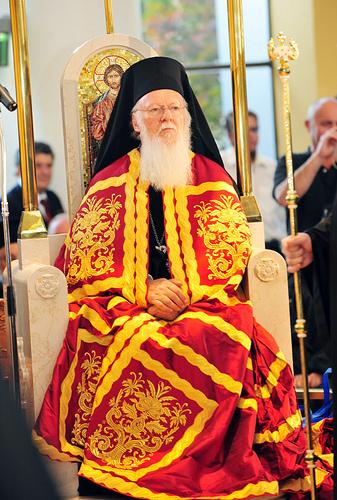 Beloved brothers and sisters in the Lord,

We wholeheartedly address you from the See of the Ecumenical Patriarchate with the joyous greeting “Christ is risen!” The resurrection of Christ is the center of our Orthodox faith. Without the resurrection, our faith is “in vain” (1 Cor. 15:14). Through His resurrection, the divine Word rendered humanity – created in the image of God but wounded and stained by sin – incorrupt and deified, granting us once again the possibility of achieving divine likeness, of which we were deprived through disobedience.

However, what does the feast of Pascha signify as the victory of life over death in a world of violence and war, especially in the name of religion and God?

Many philosophers endeavored to find a solution to the problem of death and to overcome death with various theories. We Orthodox Christians celebrate the resurrection of Christ from the dead and boldly declare the destruction of death. We know that it is the Word of God who bestows life and in whom “was life” (John 1:4). We have the joyful experience of the Church, that death was conquered through the resurrection of Christ. “All things have been filled with joy, having received the experience of resurrection.” This faith brightens all expressions of church life and culminates in the divine Eucharist. The fact that, in the Christian world, it is especially the Orthodox Church that preserved the divine Eucharist as the center of its life and spirituality is inseparably related to the fact that the resurrection is the nucleus of our faith, worship and ecclesiastical ethos. For this reason, the Eucharistic liturgy is always festive, joyous, and primarily linked with the Lord’s day as the day of the resurrection.

The most striking expression and interpretation of the resurrection as well as of its regenerative power is the image of the descent of our Lord Jesus Christ to Hades, as this is wonderfully depicted at the Chora Monastery in Constantinople. The Lord of glory descends to the depths of Hades, destroying its gates, arising victorious and resurrecting Adam and Eve in Himself, and in so doing resurrects the entire human race from beginning to end. “Now, all things have been filled with light, heaven and earth and all things beneath the earth.” Creation rises from the dark realm of death to the heavenly kingdom, whose light has no evening. The faithful, as participants in the resurrection, are called to declare the Gospel of freedom in Christ “to the end of the earth” (Acts 1:8).

The Mother Church, which lives the mystery of the cross and the resurrection simultaneously, today invites us “to approach with lit candles” “and together to celebrate the salvific Pascha of God.”

Through the resurrection of our Savior, all of humanity has become one people, united in one body. Through His cross and resurrection, Christ definitively destroyed all existing hatred. Thus, the Orthodox Church, as the one, holy, catholic and apostolic Church, is the Church of the reconciliation of all, the Church of love toward all, friends and enemies. Reconciled, filled with new life, filled with true life, we all become fellow citizens with the saints and members of the household of God (cf Eph. 2:15-20).

Unfortunately terrorism, war, and bloodshed continue to this day. The lament and agony of victims, particularly as these are rapidly disseminated through modern technological means, tear the world apart and break our heart. This is why the world’s leaders – political, religious and church – are obliged and compelled by love to do everything that is possible to avoid such unacceptable conditions.

In the midst of this modern “irrational world,” we Orthodox Christians are called to offer a positive witness of love and sacrifice to our fellow human beings.

For us as Orthodox faithful, Pascha is not a fleeting moment of escape from the ugly reality of evil in the world; it is the unwavering conviction that Christ, who trampled down death by death and rose from the dead, is with us “always, to the close of the age” (Matthew 28:20).

Beloved brothers and sisters, such is once again this year the message of the resurrection from the most holy Apostolic and Patriarchal Ecumenical Throne, the sacred center of Orthodoxy, to all people: that Christ has risen and the power of death was abolished; the authority of the powerful over the weak has been destroyed. “Life reigns” and the nurturing love, profound mercy, and endless grace of the risen Christ cover the whole world, from one end to the other. It is sufficient for us to realize that Jesus Christ is the true light, that in Him is life, and that this life is the light of all people (cf John 1:3-4). This is our message to all political and religious leaders of the world.

Therefore, approach and receive the light from the unfading light of the Phanar, which as the light of Christ and the light of love shines upon all; in Him “there is no darkness” (cf 1 John 1:5). Let us hear this Gospel of joy and light; and let us Orthodox alleviate the pain of today’s world with our own love and sacrifice.

Glory be to Him who bestows life, who has shown the light and love and peace to the world as well as to each one of us. Glory to Jesus Christ, the king of glory, the conqueror of death and champion of life.

Your fervent supplicant before the risen Christ,