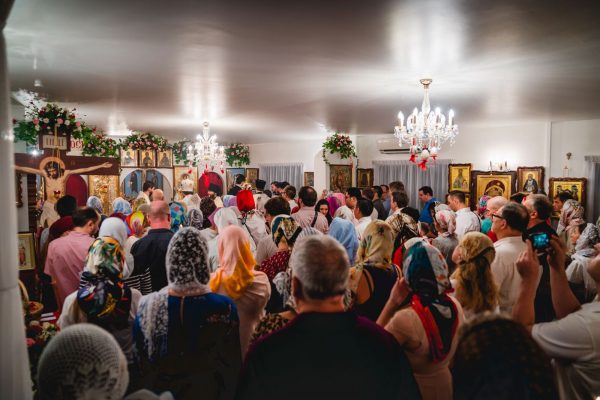 From 22nd to 27th April 2019, during the Holy Week, Metropolitan Sergy of Singapore, Patriarchal Exarch of Southeast Asia, celebrated the divine services at the Church of the Holy Dormition in Singapore.

On Easter night Metropolitan Sergy celebrated the Midnight Office, led the procession with the cross and officiated at the Paschal Matins and Divine Liturgy. Concelebrating with the archpastor were Hieromonk Pitirim (Dondenko), secretary of the Patriarchal Exarchate of Southeast Asia; Rev. Yevgeny (Shmelev), cleric of the Dormition Church in Singapore; and Hierodeacon Yuvenaly (Lapshin), cleric of the Church of the Life-Giving Trinity in Ostankino, Moscow.

Prior to the communion of worshippers Metropolitan Sergy read out the Paschal Message of Patriarch Kirill of Moscow and All Russia.

A festive repast followed the Liturgy.

On 2nd May, Thursday of the Bright Week, commemoration day of Blessed Matrona of Moscow, the Patriarchal Exarch celebrated the Divine Liturgy at the Church of St. Sergius of Radonezh on the Island of Bali, Indonesia, in concelebration with Hieromonk Pitirim (Dondenko). Rev. Iliya Melnichenko, cleric of St. Sergius Parish in Bali; and Hierodeacon Yuvenaly (Lapshin).

The Patriarchal Exarch of Southeast Asia also officiated at the Divine Liturgy in the Church of St. Sergius on the commemoration day of the ‘Life-Giving Spring’ Icon of the Most Holy Theotokos, and after the service blessed the water.

On 4th May Metropolitan Sergy celebrated the All-Night Vigil at the Church of the Holy Prince Vladimir, Equal-to-the-Apostles, in Jakarta, Indonesia. Concelebrating with the Patriarchal Exarch were Hieromonk Pitirm (Dondenko); Hieromonk Ioasaf (Tandibilang), rector of St. Vladimir Church in Jakarta; Rev. Boris Setyawan, rector of the Church of the Holy Apostle Thomas in Jakarta; and Hierodeacon Yuvenaly (Lapshin). Among those praying at the service were clerics of the Indonesia Mission of the Russian Orthodox Church Outside of Russia. After the All-Night Vigil the archpastor met with the clerics and parishioners.

On 5th May, Second Sunday after Easter, the head of the Patriarchal Exarchate of Southeast Asia officiated at the Divine Liturgy at the Church of the Holy Apostle Thomas in Jakarta, which celebrated its patronal feast that day. Concelebrating with Metropolitan Sergy of Singapore and Southeast Asia were Hieromonk Pitirim (Dondenko), Hieromonk Ioasaf (Tandibilang), Rev. Boris Setyawan, as well as clerics of the ROCOR Mission in Indonesia and Hierodeacon Yuvenaly (Lapshin).

With the blessing of Metropolitan Hilarion of Eastern America and New York, First Hierarch of the Russian Orthodox Church Outside of Russia, Metropolitan Sergy conferred on Rev. Boris Setyawan, rector of the Church of the Holy Apostle Thomas in Jakarta, the right to wear a hypogonation, a kamelaukion and a pectoral cross for his pious and zealous service to the Church. After the Liturgy the Patriarchal Exarch delivered a homily and conveyed to all those present Primatial blessings from His Holiness Patriarch Kirill with wishes of spiritual peace and God’s help.

The archpastor also presented Ms. Lyudmila Vorobyeva, Ambassador Extraordinary and Plenipotentiary of the Russian Federation to the Republics of Indonesia, Kiribati, Timor-Leste and the Independent State of Papua New Guinea, with the Order of St. Euphrosyne of Polotsk, 3rd Class.

A meeting followed the Liturgy, during which the archpastor answered numerous questions and told about his impressions of the life of Orthodox Christians in Indonesia.