Indonesia: 90,000 Soldiers to Guard Christians in 50,000 Churches for Christmas Services 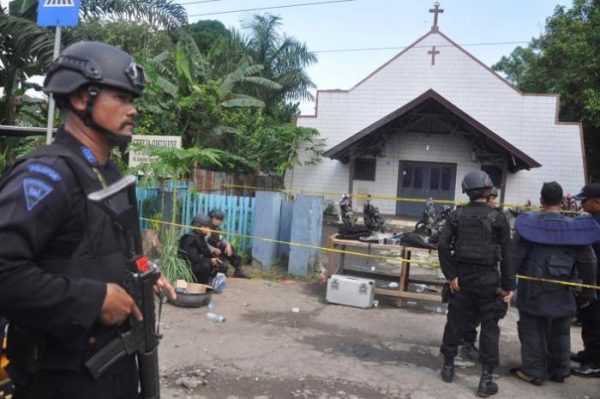 Police stand near the scene of an explosion outside a church in Samarinda, East Kalimantan, Indonesia on November 13, 2016. | (Photo: Antara Foto/Amirulloh/via REUTERS)

As many as 90,000 soldiers will be guarding more than 50,000 churches across Indonesia in an effort to thwart terror attacks during Christmas.

The church in Surabaya, East Java, was attacked by suicide bombers in May. The terrorists, linked with the Islamic State terror group, targeted three churches in the world’s most populous Islamic nation, killing 18 people.

One former Islamic radical who killed three people in 2002 spoke of his regret for what he did.

“I have repented and I will help the government educate others not to follow a radical path as I did,” Mokhtar Daeng Lau said at the time.

Another man by the name of Sumarno, who took part in 2002 Bali bombings where Islamic radicals killed over 200 people, added: “I deeply regret what I have done. I did not expect that so many victims were our brothers and sisters.”