Patriarchal Moleben in Sochi Will Be Attended by Athletes from Russia, Ukraine, Belarus, and Moldova

“I would like to wish the athletes that the Olympics be successful for us,” said the Patriarch.

February 4, 2014. PRAVMIR. His Holiness, Patriarch Kirill of Moscow and All Russia, who arrived yesterday in Sochi, will celebrate a moleben [supplicatory service] in the Church of the Icon Not-Made-By-Hands of the Savior in Sochi. It is expected that the moleben will be attended by representatives of the Olympic teams from Russia, Ukraine, Belarus, and Moldova. 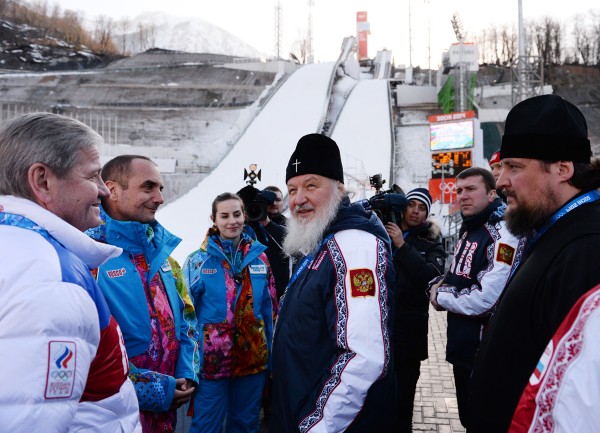 As the press service of the Patriarch of Moscow and All Russia has stated, the same day His Holiness will inspect the sports facilities in the Olympic Park and meet with volunteers sent to the Olympics by church organizations.

On February 4, accompanied by the honorary vice-president of the Russian Olympic Committee, V. A. Vasin, Patriarch Kirill visited a number of sports facilities in the Olympic mountain cluster. In particular, the Patriarch visited the “Sanki” sledding center, where he inspected the start and finish areas and watched athletes training for their performance at the Olympics. Then the Primate of the Russian Church visited the “Russian Hills” complex and the ski stadium.

In one of the sports facilities, in conversation with a journalist of RIA “Novosti,” His Holiness, Patriarch Kirill, said:

“I believe that engaging in sports brings great benefit to man. The physical activity and, more important, the psychological training that accompanies one engaged in sports has a very positive impact of the formation of character. It produces remarkable qualities: one must be bold, courageous, and be able to take reasonable risks.

“And if we are to speak about team sports, then mutual support, team spirit, and real solidarity are also important,” His Holiness remarked.

In the words of His Holiness, sports are beneficial to all, regardless of their profession.

“All this creates wonderful human qualities that are needed in life, whatever a person does – whether he’s a doctor, an engineer, a businessman, a politician, or a priest,” the Patriarch emphasized.

Responding to questions from a correspondent of the “Russia-24” station, the Primate of the Russian Church stated his great appreciation for the quality of the Olympic facilities and the work of their designers and builders, also noting that the presence of such infrastructure will successful prepare for future sporting events.

“But I would like to wish the athletes that the Olympics be successful for us,” added the Patriarch.

The opening ceremony of the Winter Olympics in Sochi will take place on February 7.