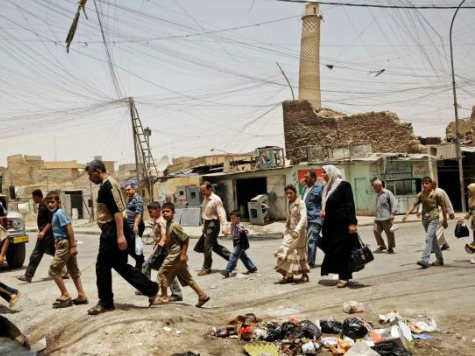 (AINA) — A joint statement on the ISIS occupation of Assyrian villages in north Iraq has been issued by the Syriac Orthodox Patriarch and the Syriac Catholic Patriarch. The statement calls the actions of ISIS a “criminal act which amounts to an ethno-religious genocide.”

ISIS captured Mosul on June 10, 2014 and moved into the Nineveh Plain, an Assyrian stronghold in north Iraq, on August 7, causing nearly 200,000 Assyrians to flee their homes and villages. ISIS has also destroyed Assyrian churches, monasteries and archaeological sites.

Here is the text of the statement:

Two Years Since the Eviction of our People from Mosul and the Nineveh Plain: the Wound of Forced Emigration Is Still BleedingTwo years passed since the uprooting of our Syriac people from the land of our ancestors in Mosul and the Nineveh Plain, following the criminal act which amounts to an ethno-religious genocide, committed by ISIS and other terrorist groups which consider infidels all those who do not share their religion or believe in their confessional doctrines.

On June 10, 2014, our people were forced to leave Mosul. On the eve of August 7 of the same year, the uprooting continued and our people were forced to leave Qaraqosh, Bartelly, Bahzani, Bashiqa, Telosqof, Al-Qosh, Karamlis, and other villages and towns of the Nineveh Plain. They became refugees and homeless in the Kurdistan Region of Iraq and the neighboring countries of Lebanon, Jordan and Turkey.

Today, two years after the calamity that was brought upon our people, the decision-making countries and the international community remain silent and inactive towards the ethnic cleansing of a historical people who founded the civilizations of the area. We are the descendant of the martyrs who defended their faith, land and honor. They witnessed to the point of shedding their blood for its sake.

We welcome the decision of certain countries to recognize these terrorist acts as a genocide against Christians and other ethnic and religious minorities. However, we strongly denounce the absence of serious actions from the part of the international community and the Iraqi government to step up the liberation of Mosul and the villages of the Nineveh Plain from the terrorist groups. They destroyed our churches and monasteries, particularly the monastery of St. Behnam and Sarah where the tomb of the saint was bombed. They stole the properties and possessions of our people, spreading the darkness of death, destruction and moral degradation.

As spiritual fathers of this people, our hearts were pierced with pain and our eyes were filled with tears every time we visited, together and separately, our displaced children who settled in the cities and towns of the Kurdistan Region in Iraq. We observed their suffering and the lack of the most basic elements needed for a dignified life, namely housing, work, health care or education for the children. We thank the Government of the Kurdistan Region in Iraq for their efforts to offer the basic services in these difficult times. We, likewise affirm our demand for the immediate liberation of Mosul and the Nineveh Plain and the return of our sons and daughters to their land and homes. They should enjoy security and stability as well as living conditions that ensure their dignity and help them restore their trust in their country and their hope in a bright future.

Hence, we tell our spiritual children who were forced out of their homes and communities:

We are with you in every moment, we urge you to remain the shining lamp in the darkness of this tribulation, for your return to your homes will be soon. We trust the promise of the Lord that He will remain in the midst of His Church and She will never fall.

Do not lose your faith, be encouraged and remain firm in the Lord Jesus Christ Who tells us not to be afraid, saying: “Take courage, I have conquered the world” (John 16: 33).