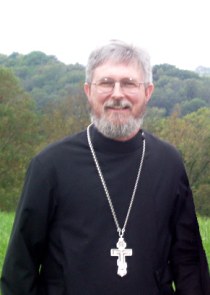 Earth is a wondrous place. No matter where we go – no matter how deep, how far, how high, how hot, or how inhospitable – we find life in this place. Everywhere we look on our nearest neighbor, Mars, we find no life. We want to find life. We hope to find life. We theorize life. But we have yet to find it.

There is something about life, at least in our earthly experience, which is inexorable. Any individual case of life may be fragile, but life itself endures. In the Genesis account we are told that God blessed this planet and said:

Note that the account does not say that God said: “Let there be life!” and life just appeared. (Boom! Trees!) But that He blessed this place and commanded that it bring forth grass, herbs, and trees, according to their kind – and it was so!

In the Eastern tradition, the feast of Pentecost celebrates the Descent of the Holy Spirit on the Church, as do Christians across the world. However, there is one strange aspect to the Eastern version of the feast (or so it might seem). The feast focuses as much on the Holy Spirit’s work in Creation as it does on the Spirit’s work in the Church. The Church is decorated in green. In the Russian tradition, birch branches are brought into the Church; fresh green grass is placed on the floor; and flowers are everywhere. In Soviet times a secular version of the festival remained, called the Day of Trees.

The outpouring of the Holy Spirit on the Church is not something separate from Creation; the trees are not a distraction from the Church. They are, together, a proper reminder of the role that God’s Spirit plays always and everywhere. He is the “Lord and Giver of Life.” 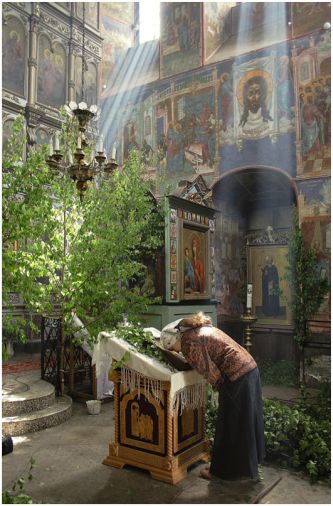 Just as the Spirit moved over the face of the waters in the beginning of creation, so too does He move over the face of all things at all times, bringing forth life and all good things. Although I am frequently assaulted by bouts of pessimism, despairing over various aspects of our distorted civilization, the truth is that, like the planet itself, civilization – with its drive for beauty and order – seems inexorable. The history of humanity is not the story of a fall from a great civilization with increasing instances of barbarism and cave dwelling. Great civilizations have risen and fallen, but civilizations continue to occur. Some may already have begun in the ruins that surround us now.

The story told in Scripture is not the story of collapse and decay. There are certainly dire warnings of terrible trials and great catastrophes. But these things do not reveal the mystery of God’s will. These things are cracks in the pavement while life continues to burst forth:

God has made known to us the mystery of His will, according to His good pleasure which He purposed in Himself, that in the dispensation of the fullness of the times He might gather together in one all things in Christ, both which are in heaven and which are on earth – in Him (Ephesians 1:9-10).

What appeared as tongues of flame upon the heads of the disciples at Pentecost was a manifestation of this Divine Purpose at work. With the sound of a mighty rushing wind, the Holy Spirit filled the room. The fullness of the Church burst into the streets, proclaiming the Gospel in a multitude of languages. Being birthed in Jerusalem was the New Jerusalem, where there is neither slave nor free, Jew nor Greek, male nor female. Instead there is the fullness that fills all things, bringing forth all things in one – in the One Christ Himself.

The voice of Pentecost is the voice of Creation’s groans being transformed into the glorious liberty of the children of God. Stones cry out, trees clap their hands, and the song of creation rejoices in the One Christ.