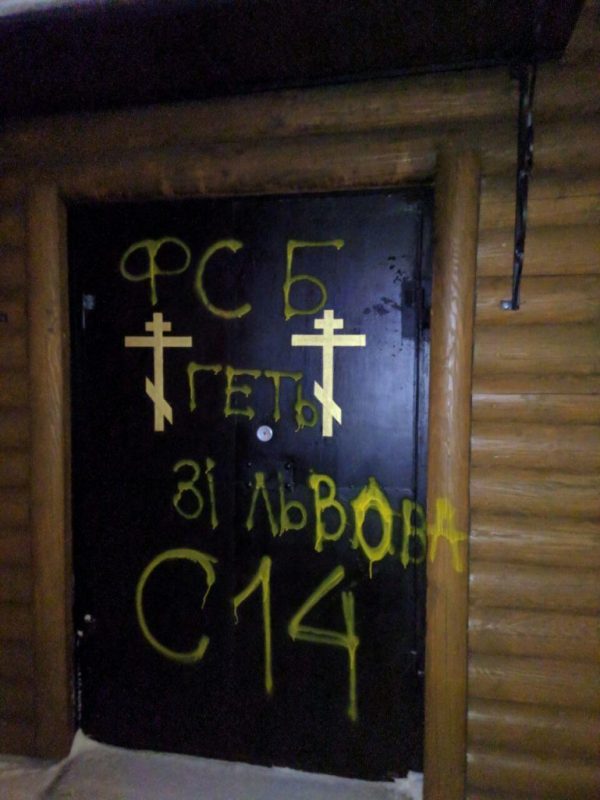 Ukraine, January 15, 2019 – Whereas the canonical Ukrainian Orthodox Church was experiencing intimidation before, the state authorities have now moved into repressions against the Church, says His Eminence Archbishop Theodosy of Boyarka.

Since the creation of a new nationalist structure at the “unification council” on December 15 and the granting of a tomos of autocephaly by Patriarch Bartholomew to “Metropolitan” Epiphany Dumenko on January 6, the canonical Ukrainian Church has experienced increased persecution from the state and nationalist-schismatics.

The community of the St. Alexander Nevsky Church in Vinnitsa, located on the territory of a higher professional school, was suddenly forced to evacuate the premises after 13 years and take all their belongings, including the dome on the roof. Several Ukrainian outlets subsequently reported that the priest had destroyed and even set fire to the church in protest of some parishioners supporting the new nationalist church, though the Vinnitsa Diocese refuted this lie.

The priest and community of a 340-year-old church in the village of Vorsovka have been locked out of their church, after the warden and candle stand worker at the church collected signatures from throughout the village, whether parishioners or not, to move the parish to the nationalist church. The schismatics had previously tried to demand that the rector, Fr. Basil, stop commemorating His Holiness Patriarch Kirill in the services. Fr. Basil was also hospitalized with a hypertensive crisis.

Despite a meeting being called by supporters of the schismatic church to try to force the local church to transfer to the schismatic structure, the residents of the village of Dunaets in the Sumy Province voted almost unanimously to keep their St. George Church in the canonical Church.

In the Uman Diocese, the Church of She Who is Quick to Hear was vandalized with graffiti reading “ROC FSB? [Russian Orthodox Church-Federal Security Service of Russia].”

Schismatics organized another meeting in the village of Lukashenka in the Vinnitsa Province to force the Sts. Cyril and Methodius Church to switch to the new nationalist church, but the majority supported staying with the canonical Church. The schismatics had also tried to lock the priest out of the church.

Schismatic leader and “honorary Patriarch” Philaret Denisenko called on the Ukrainian Parliament to adopt the anti-Church bill No. 4128 that stipulates how churches are to be moved from the canonical Church to the schismatic. As Denisenko explained, they already passed a law requiring the Ukrainian Church to change its name, but there is as yet no mechanism for parish realignments. Why the matter should be taken up by the government remains unclear.

Priests of the Rivne Diocese were summoned to a meeting with President Poroshenko during his victory lap around Ukraine by the district administration heads. The proposal to talk was peaceful at first, but the officials later tried to even pressure the priests’ families. The priests are afraid to speak publicly because of how the authorities will retaliate. Poroshenko previously tried to force the bishops of the Ukrainian Church to meet with him at the Secular Ukrainian House to intimidate them into attending the “unification council,” though they staunchly refused to meet him outside of the Kiev Caves Lavra.

Schismatics physically seized a parish in the village of Krasnovolia in Volyn, locking out the rector and ruling hierarch, Bishop Nathanael of Volyn and Lutsk. Activists brought a “Kiev Patriarchate” priest and declared him the new rector.

Radical nationalists from the Svoboda terrorist organization forced a parish in the Odessa Province to switch to the schismatic structure. As the priest refused, the schismatics will be supplying a new priest. Svoboda radicals also prevented the clergy and faithful of the St. Nicholas Church in the village of Vorsovka in the Zhytomyr Province from entering the church. The rector, Fr. Vitaly, was forced to served outside the church. The radicals tried to drown out the service by shouting the Ukrainian national anthem. They claim they have already drawn up the necessary documents to force the parish into schism.

Ancient icons were stolen from the wooden Church of the Archangel Michael in the village of Smolyava in the Volyn Diocese as well as some Church utensils. The theft was noticed on January 13.

Radicals from the group C-14 vandalized two churches in Lvov with graffiti statements such as “Moscow Patriarchate get out of Lvov,” and “MP-FSB.” The radicals themselves posted pictures online with the caption: “C-14 activists reminded the Kremlin agents that they have no place in Lvov.”

“We will confess the faith that Christ has left us,” the statement says. “We remain faithful to the Lord God, our canonical UOC in the person of his Beatitude Metropolitan Onuphry of Kiev and All Ukraine and will serve, first of all, God, the true Orthodox faith, and the Ukrainian people, and we will be in prayer with the entire canonical Orthodox world.”