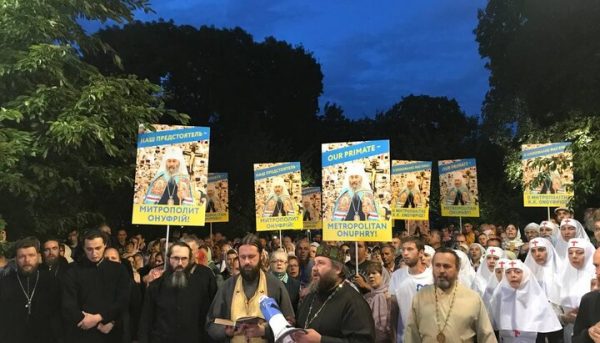 Nearly five hundred believers hold a prayerful stand in front of the residence of Patriarch Bartholomew of Constantinople in Kiev, holding portraits of the head of the Ukrainian Orthodox Church in their hands with the inscriptions in English and Ukrainian “Our Primate is Metropolitan Onuphry.”

According to Interfax-religion, the goal of these believers is to achieve a meeting with Patriarch Bartholomew to tell him about the real situation in Ukrainian Orthodoxy after the granting of the tomos to the Orthodox Church of Ukraine, created at the end of 2018 on the basis of two non-canonical Ukrainian churches.

On Monday morning, Metropolitan Onuphry himself came to the participants of the stand, which has been going on for the third day, and blessed his flock and clergy.

In addition to the portraits of Metropolitan Onuphry, the believers of the canonical Church brought posters with a call to protect Orthodoxy from the “Bartholomew schisms”. During their stand, the participants read akathists and sing hymns.

Last Saturday, believers of the UOC held a stand at the Verkhovna Rada, where the Patriarch of Constantinople arrived on a working visit, but he was escorted through the service gate, said Archdeacon Andrei Palchuk, a participant in the prayerful stand. After his meeting with the deputies, Patriarch Bartholomew, as noted by the media, did not go out to the believers of the UOC, but left the Rada building through the courtyard, where a red carpet was laid out for him.

Patriarch Bartholomew is visiting Ukraine on August 20-24 at the invitation of President Volodymyr Zelensky on the occasion of the 30th anniversary of the country’s independence.

Most viewed articles
How Can We Evangelize Today?172
A Stone Thrown at God and Your Neighbor122
Five Signs of a Modern Pharisee105
Trial of Politician Defending Traditional Marriage Begins in Finland93
Hierarchs of Three Local Orthodox Churches Concelebrate in Argentina90
Metropolitan Onuphry: “The Key to the Doors of Paradise is Repentance”71
Patriarch Daniel prays for Romania’s national unity, peaceful coexistence and dignified cooperation with other peoples44
Grains of Wisdom and Piety Book Published27
Medical Workers Walk 1.5 Km Through Snowdrifts and Save the Life of a 100-Year-Old Woman24
Most popular authors
Pravmir.com team305
Frederica Matthewes-Green172
Protopresbyter Themistoklis Mourtzanos122
Archimandrite Markell (Pavuk)105
Aurelian Iftimiu44