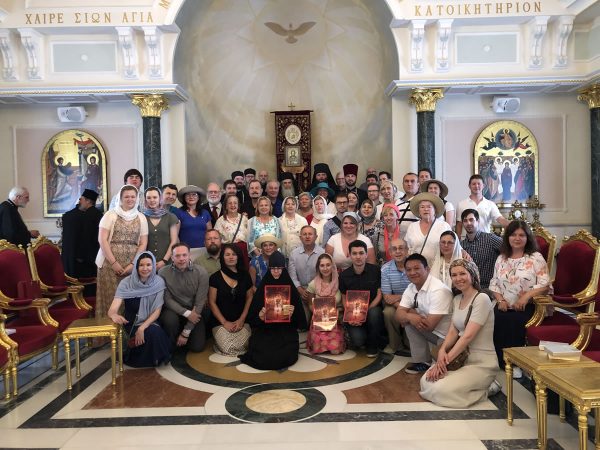 On Tuesday, May 28, 2019, a pilgrimage of clergy and laity of the Russian Church Abroad began, organized by St Seraphim Memorial Church in Sea Cliff, NY, led by His Grace Bishop Nicholas of Manhattan, Deputy Secretary, Deputy Secretary of the Synod of Bishops. Over 50 participants from North and South America, Europe and Australia are participating.

In Tel Aviv Airport, His Eminence and the pilgrims were warmly greeted by Archimandrite Roman (Krassovsky), Chief of the Russian Ecclesiastical Mission in Jerusalem of the Russian Church Abroad. The pilgrims then headed to Galilee, where the next day they visited Mt Tabor, the holy sites of Nazareth, Cana of Galilee, Capernaum, and the Galilean portion of the Jordan River. Vladyka Nicholas performed prayer services at each site, accompanied by short sermons. A nun guiding the pilgrims also gave descriptions of the spiritual, historical and archeological aspects of each site and answered questions.

On May 30, the group headed for Jerusalem, visiting Haifa on the way. On Friday, May 31, Bishop Nicholas and his pilgrims were received by His Beatitude Patriarch Theophilos III of Jerusalem and All Palestine, during which he offered words of guidance to the pilgrims and his blessing, asking that they relay his greetings to the First Hierarch of the Russian Church Abroad.