Source: Vestnik Kavkaza
Natalya Mihailova | 06 May 2015
Not long ago, Pope Francis called on Catholics to participate in politics, calling it “one of the highest forms of love, as its aim is taking care of the global welfare.” According to katolik.ru, the Pope also stressed that participation in politics was a kind of martyrdom, as it demanded faithfulness to the ideal of the global welfare and bearing a heavy cross of disappointments and sins. “Can a Catholic be involved in politics? Of course, he should do it. Should a Catholic interfere in politics? He should do it!” the Pope believes. 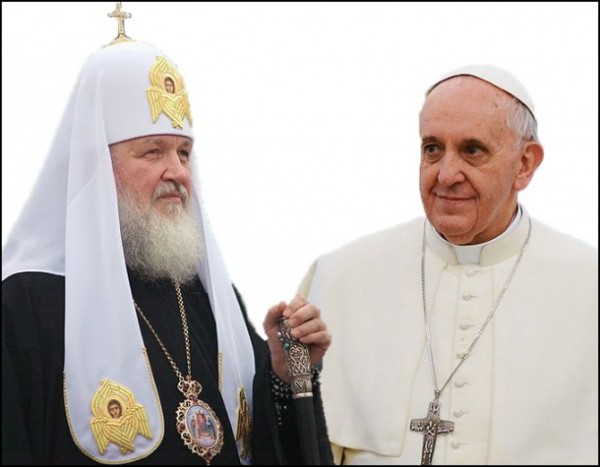 The Russian Orthodox Church is also concerned about politics. “The system of international relations formed after World War II is going through difficult times. And armed clashes, coups, political crises, and various revolutions are becoming a reality in many countries of the world and a change in the world order which was formed according to the results of World War II,” Patriarch of Moscow and All Russia Kirill says.

Today the Russian Orthodox Church is especially concerned about what is happening in North Africa, the Middle East and in some other countries of Asia and Africa where Christian minorities are exposed to direct persecutions. “The Arab Spring had the sources of the external impulses of its origin in relation to the Arab world. Under pretense of democratization it led to the collapse of the existing political regimes. But, as often happens, the aims of the revolution failed to be achieved.

Every revolution is a process of replacing elites, as well as redivision of spheres of influence. It means that one elite is replaced by another. This is all right when some positive goals for the nation are achieved. But what if they are not achieved?

In fact, the events that took place in North Africa and the Middle East are examples of a classic rebellion: destabilization of the situation in the Middle East and North Africa gave rise to violence. As I have already said, the expulsion of Christians from their native land. We are the most vulnerable before the terrible face of extremism and terrorism, that uses the name of Islam as a mask. The terrorists commit awful, cruel actions, declaring their main aim to be the complete expulsion of Christians from their traditional places of residence. Those actions that are taking place in this region can be called a genocide of the Christian population,” the Patriarch believes.

He said that he used to visit Iraq at the end of the rule of the previous regime: “There were 45 Christian churches at that time. There are no churches now. It would be a different matter if we would shut down and make machine-tractor stations, as happened in other places. But they destroyed everything to the foundations, together with manuscripts, frescoes and works of art. 400 Christian churches in Syria have been damaged and destroyed. I ask: who will restore them? Who will give money? And will they? Will they pay any attention to the fact that 400 churches were destroyed? Without any reason, without anything, because someone does not like the fact that the territory of Syria is the historical homeland of the Christian community. The Middle East is the birthplace of Christianity. And all these terrible scenes of destruction of Copts, and then Ethiopians in Libya is a demonstration of force and intimidation, but actually it is a small part of the events that are happening. Because every day people are being killed for their beliefs.”

It seems to the Patriarch that “the large-scale persecutions of Christians from the Middle East region, together with the rapid spread of extremism and terrorism, are a long-term factor of destabilization in the Middle East. Indeed, the reduction of the Christian population breaks the balance and provokes Islamic extremism, because a multi-religious society, which got used to existing in such boundaries and in such dimensions for centuries, is becoming mono-religious, created on a wave of intolerance towards other religions.”

“What is awaiting these societies? What bundle of negative energy will we have in these regions? How will relations with the countries and communities that have been created on the wave of this terrible intolerance develop? These are matters of global order, a global dimension, not only matters for the subject of a settlement of the political situation in the Middle East.”