Source: Sputnik
Pope Francis said he would meet the Russian Patriarch Kirill, however doubted both the Catholic and Orthodox Church would agree to end the 1,000-year division.
Natalya Mihailova | 01 December 2014
MOSCOW, December 1 (Sputnik) – After a meeting with Ecumenical Patriarch Bartholomew I in Istanbul, Pope Francis said Monday he would like to meet the head of the Russian Orthodox Church Patriarch Kirill, Associated Press (AP) reported. 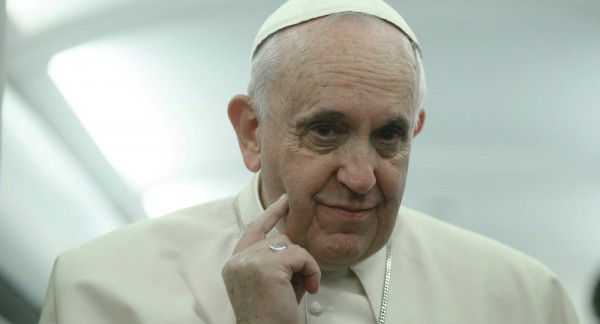 “I said I’ll go wherever you want – you call me and I’ll go. And he also has the same desire,” Pope Francis said, as quoted by AP, in reference to his will to meet the Russian Patriarch. “But with the problems of the war, the poor guy has so many problems, so a meeting with the pope will have to wait. But we do want to meet. We want to go forward.”

On Sunday, Pope Francis bowed down before the Orthodox Patriarch Bartholomew I to receive his blessing. Despite such a remarkable gesture of respect, Francis said he doubted both the Catholic and Orthodox Church would agree to end the 1,000-year division, AP reported.

The Pope further said neither the Catholic nor Orthodox Churches would submit to nor assimilate the other, instead working “towards the restoration of full Communion”, the CNN said.

“I want to assure each one of you here that, to reach the desired goal of full unity, the Catholic Church does not intend to impose any conditions except that of the shared profession of faith,” Pope Francis said, quoted by the CNN.

The Catholic and Orthodox Christians split back in 1054 over differences concerning the primacy of the papacy. Recently, the two churches have grown together. The Pope Francis spoke about a possible path toward unity between the two churches. “Unity is a path, a path that we must take and one that we must take together,” Francis said, quoted by the Business Standard.