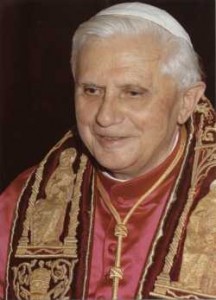 Pope Benedict XVI has agreed with the Russian Orthodox Church’s position regarding acts of vandalism in downtown Moscow’s Christ the Savior Cathedral, the Church said.

“Pope Benedict XVI has expressed solidarity with the Russian Orthodox Church’s position on the issue and perplexity over the reaction of a number of media to these events,” the church said on its website on Wednesday.

It said the head of the Roman Catholic Church also expressed his “words of support to the Russian Church in connection with the blasphemous act in the Christ the Savior Cathedral in February.”

The issues were discussed at a meeting between Metropolitan Hilarion of Volokolamsk, chairman of the Russian Church’s Department of External Church Relations, and the Pope in the Vatican on Tuesday.

In September, a man poured ink on an icon in the central Moscow cathedral. Earlier, vandals sawed down crosses in three Russian regions. In March a man chopped 38 icons in the Vologda Region with an ax. The events followed February’s “punk prayer” in the Christ the Savior Cathedral.