Pornography is an Affliction for Young Men. And it’s Been Mainstreamed.

Source: Star Tribune
It comes from the depths of hell to destroy their characters before they can grow into a healthy sense of who they are.
Fr. Johannes (Hans) Jacobse | 22 December 2018 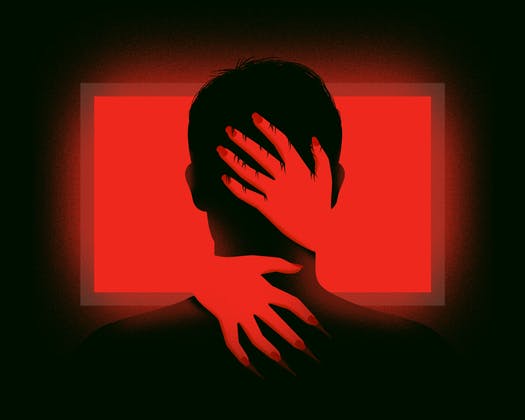 MATT CHASE Illustration by Matt Chase for the Star Tribune

I am old enough to remember the sexual revolution and its dubious promises that once moral restraints on sexual behavior were removed, a new golden era would dawn in which everyone would live happily, carefree and satisfied.

It didn’t turn out that way. Today I deal with the destruction that revolution caused and try to bring healing to men damaged by it.

I mentor young men, and I see how the mainstreaming of pornography has hijacked their journey from adolescence to adulthood.

Growing up is a difficult process, fraught with all sorts of emotional turmoil that tempt young men to look toward pornography for relief. Once the seeking of relief becomes habitual — and this can happen quickly — the necessary experiences that boys require to become men are often thwarted. Tension is resolved not by learning how to master the problems of life, but by ever deeper retreat into sexual fantasies.

Today this affects more of our young men than we can count. In my experience, the consumption of pornography is nearly universal among young men, and the effects are never neutral. Researchers indicate that only 3 percent of boys and 17 percent of girls have never seen pornography. The internet now makes it available anytime and anywhere. First exposure most often occurs during adolescence, when the brain is still forming and very impressionable by graphic images.

We don’t need a library of psychological studies to confirm these kinds of elementary truths. Generations before us intuitively understood them. That’s why they restricted pornography to places where only the chronically addicted would seek it out. Today we blindly lead our children to a pit of destruction, believing our ignorance of the wisdom practiced in earlier generations is somehow virtuous.

It works a lot like drug use. Give me a young man who has a problem with drugs and wants to get clean, and the first question I ask is when he began using drugs. That tells me when maturation stopped and where to locate the problems that led to the drug use. Only when those problems are dealt with can the flourishing begin that young men yearn for.

How does healing occur? The truth is that young men long to become stable and mature. Once they begin grappling with the hold pornography and its attendant behaviors have over their lives, something remarkable occurs. They start to experience what a healthier interior life (heart, soul and mind) feels like, and they want more of that feeling.

I tell young men that the journey of self-discovery is the most exhilarating adventure a man can undertake. This journey never ends. I also tell them to resist all false promises that can imprison the soul. The lies are like a cupful of sand given to a thirsty man. Choose the water.

We begin this journey together, but eager young men learn fast. All most need is a road map, encouragement and accountability.

Sexuality is closely tied to creativity. Flourishing first occurs when the young man morally reorients himself so that his creativity can be expressed in ways that conform to his native gifts and talents. This requires a counselor or spiritual director like me who can discern what the gifts are and guide the young man toward them.

Not all young men succeed. Once I was contacted by a young man who longed to serve in the Coast Guard. He needed to finish college first. He could have succeeded, but in the end he was unwilling to undergo the struggle to overcome the habituation that was holding him back.

Had he been born a generation earlier, he might have avoided the conflict altogether.

This poisoned fruit of the sexual revolution may be with us for generations.

Prayers Are Like Arrows – Good Archers Select Only The Best Ones

Teen Sex is Killing Our Kids

Book Review: "Epidemic: How Teen Sex is Killing Our Kids" by Meg Meeker. The explosion of sexually transmitted…

Most viewed articles
We Are Not Saint Mary of Egypt (But We Can Still Repent)204
Dining with Caesar139
Orthodox Priest Rescues Two People from Fire in Constanța133
Athens and Jerusalem: the Role of Philosophy in Faith, with Analysis by St. Gregory Palamas122
Archbishop of Australia Attends Commemorative Events for Battle of Crete in Melbourne33
What Does Asceticism Look Like?1
Most popular authors
Archpriest Geoffrey Korz204
Archpriest Lawrence Farley139
Aurelian Iftimiu133
Eric Hyde122
Pravmir.com team32
Maria Trushanina1
Archpriest Michael Gillis1