Source: DECR
Natalya Mihailova | 21 April 2015
April 19, 2015 – Metropolitan Niphon of Philippople, representative of the Patriarch of Antioch and All the East to the Patriarch of Moscow and All Russia, celebrated the Divine Liturgy at the Moscow representation of the Church of Antioch with a special prayer for the two abducted Christian hierarchs – Metropolitan Paul of Aleppo (Patriarchate of Antioch) and Metropolitan Mar Gregorios Ibrahim of Aleppo (Syrian Orthodox Church). 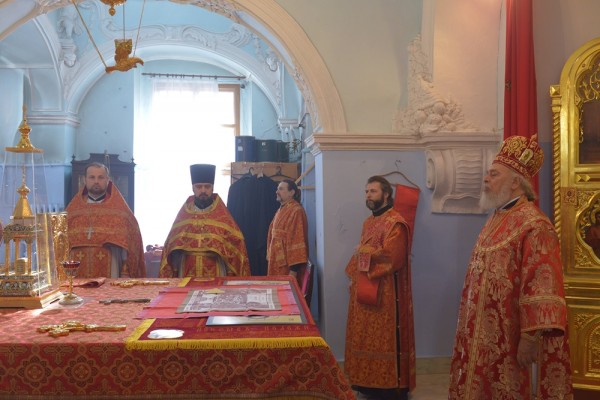 Presently it will be two years since the car carrying the hierarchs was stopped by an armed group of people on its way from Antakia to Aleppo, where they were going to meet with their flock on the eve of the Passion Week and Holy Pascha. Nothing is still known about the fate of the two metropolitans.

Concelebrating together with His Eminence Niphon in the church of the Archangel Gabriel were Archpriest Igor Yakimchuk, representative of the Moscow Patriarchate department for external church relations, and the Antioch representation clergy.

After the service, Metropolitan Niphon read out a joint message from Patriarch John X, Primate of the Orthodox Church of Antioch, and Patriarch Ignatius Aphrem II of the Syrian Orthodox Church, concerning the two metropolitans. Before that His Eminence Niphon expressed special gratitude to Patriarch Kirill of Moscow and All Russia, noting that Christians in the Middle East can feel the help and support of the Russian Orthodox Church and the Russian state. ‘All this confirms the historical ties of our Churches; our people will never forget it’, he stressed.

Archpriest Igor Yakimchuk, in his address to the congregation, asked Metropolitan Niphon to convey to Patriarch John of Antioch and All the East ‘assurances that we will not weaken our prayers for the fate of the two brothers in the East and our prayers for peace in Syria, Lebanon and other countries in the Middle East’.