Prayer can be extremely brief. If you are just starting out on your path of prayer, begin with very short prayers, such as can allow you to focus. God does not need words; He needs men’s hearts. Words are secondary; of paramount importance are the feeling and disposition with which we approach God.
Metropolitan Hilarion (Alfeyev) | 13 May 2014
We are pleased to announce the beginning of a new series on prayer, transcribed from television episodes presented on Russian television in the spring of 1999 by Fr. (now Metropolitan) Hilarion (Alfeyev) with the blessing of His Holiness, the late Patriarch Alexy II of Moscow and All Russia. We hope to present three sections a week, each of which is relatively brief but substantial, for a total of thirty-two episodes. 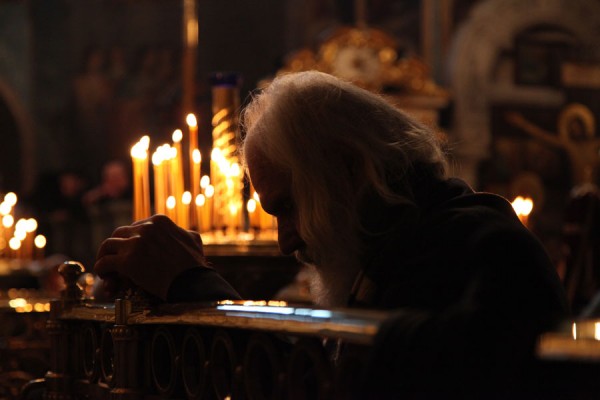 People often ask: how should we pray, in what words, and in what language? Some even say: “I do not pray because I do not know how; I do not know any prayers.” One does not need any specialized skill for prayer. One can simply talk with God. At the divine services of the [Russian] Orthodox Church, we use a special language: Church Slavonic. But in private prayer, when we are alone with God, there is no need for any special languages. We can pray to God in the language we use when speaking with people, when thinking.

Prayer should be very simple. St. Isaac the Syrian said: “The whole fabric of your prayer should be succinct. One word saved the publican, and one word made the thief on the cross heir to the Heavenly Kingdom.”

Let us recall the parable of the Publican and the Pharisee: Two men went up into the temple to pray; the one a Pharisee, and the other a publican. The Pharisee stood and prayed thus with himself, God, I thank thee, that I am not as other men are, extortioners, unjust, adulterers, or even as this publican. I fast twice in the week, I give tithes of all that I possess. And the publican, standing afar off, would not lift up so much as his eyes unto heaven, but smote upon his breast, saying, God be merciful to me a sinner (Luke 18:10-13). And this short prayer saved him. Let us also remember the thief who was crucified with Jesus and who said to Him: Lord, remember me when Thou comest into Thy kingdom (Luke 23:42). This alone was enough for him to enter Paradise.

Prayer can be extremely brief. If you are just starting out on your path of prayer, begin with very short prayers, such as can allow you to focus. God does not need words; He needs men’s hearts. Words are secondary; of paramount importance are the feeling and disposition with which we approach God. To approach God without a feeling of reverence or with distraction – when during prayer our mind wanders to the side – is much more dangerous than saying the wrong words in prayer. Distracted prayer has neither meaning nor value. A simple law is at work: if the words of prayer do not reach our heart, they will not reach God. As it is sometimes put, such prayer does not reach above the ceiling of the room in which we are praying, and it should reach the heavens. Therefore it is very important that each word of prayer should be felt deeply by us. If we are incapable of focusing on the long prayers contained in the prayer books of the Orthodox Church, try your hand at shorter prayers: “Lord, have mercy,” “Lord, save,” Lord, help me,” “God, have mercy on me, the sinner.”

Let us remember that God long for our hearts, not for our words. If we will turn to Him with our whole hearts, then we will certainly get a response.