On Prayer XXI: The Practice of the Jesus Prayer

Gradually, to the extent that your heart becomes more responsive to the words of this prayer, you can reach the point that it becomes unceasing – moreover, the main content of the prayer will not be in pronouncing the words, but in the constant feeling of God’s presence in your heart.
Metropolitan Hilarion (Alfeyev) | 28 June 2014
We continue a series on prayer, transcribed from television episodes presented on Russian television in the spring of 1999 by Fr. (now Metropolitan) Hilarion (Alfeyev) with the blessing of His Holiness, the late Patriarch Alexy II of Moscow and All Russia. We hope to present three sections a week, each of which is relatively brief but substantial, for a total of thirty-two episodes. 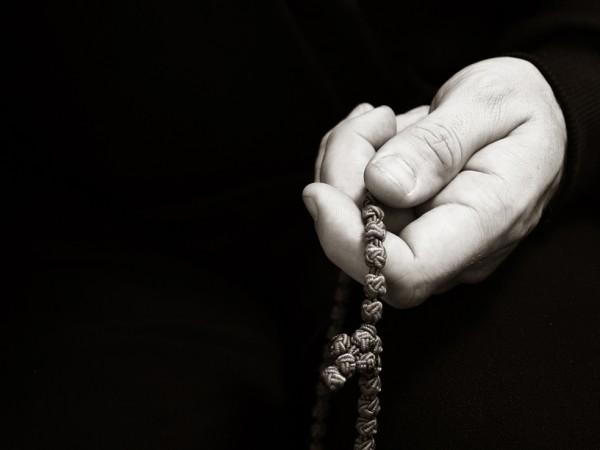 Let’s talk about the practical aspects of the Jesus Prayer. Some people set themselves the task of repeating the Jesus Prayer over the course of the day, say, one hundred, five hundred, or one thousand times. To count how many times they have said the prayer, they use a prayer rope, which may have fifty, one hundred, or more knots. Pronouncing the prayer in their mind, people use a prayer rope. But if you are just beginning the ascetic struggle of the Jesus Prayer, then you should pay more attention to quality, rather than quantity. It seems to me that one should begin with a very slow pronunciation out loud of the words of the Jesus Prayer, ensuring that that heart participates in the prayer. You pronounce: “Lord… Jesus… Christ… ” – and your heart should, like a tuning fork, respond to every word. And do not seek immediately to say the Jesus Prayer many times. Just say it ten times, but if your heart responds to the words of the prayer, that will be enough.

Man has two spiritual centers: the mind and the heart. With the mind is connected intellectual activity, the imagination, and thoughts; with the heart is connected emotions, and experiences. When saying the Jesus Prayer, the center should be the heart. That is why, praying, you should not try to represent anything in the mind – for example, Jesus Christ – but should try to keep your attention in the heart.

The ancient ecclesial ascetic writers developed a technique of “guarding the mind in the heart,” whereby the Jesus Prayer was connected with the breathing: when you inhaled, you said “Lord Jesus Christ, Son of God”; and when you exhaled: “have mercy on me, the sinner.” One’s attention was, as it were, naturally transferred from the head to the heart. I do not think that everyone should practice the Jesus Prayer in this way; it is enough to say the words of the prayer with great attention and reverence.

Start your morning with the Jesus Prayer. If during the day you have a free minute, recite the prayer a few more times; in the evening, before sleep, repeat it until you fall asleep. If you learn to wake up and fall asleep with the Jesus Prayer, this will give you enormous spiritual support. Gradually, to the extent that your heart becomes more responsive to the words of this prayer, you can reach the point that it becomes unceasing – moreover, the main content of the prayer will not be in pronouncing the words, but in the constant feeling of God’s presence in your heart. And if you began by saying the prayer out loud, you will gradually reach the point that you will say it only in your heart, without the involvement of the tongue or lips. You will see how the prayer will transform your entire human nature and all your life. This is the special power of the Jesus Prayer.