Prayers for Protection against Malicious Contagion Offered in Norwegian Trondheim 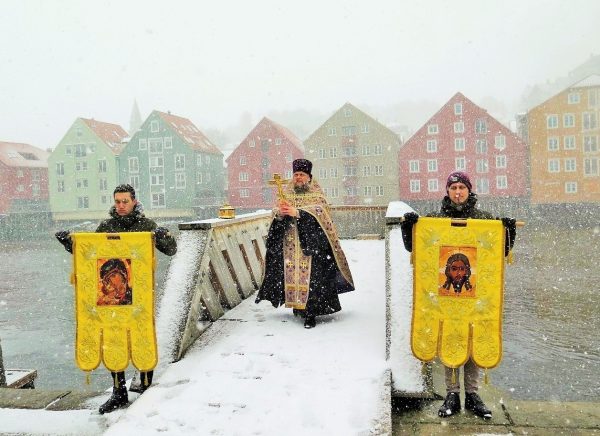 A cross procession with an icon and a shrine with a particle of the holy relics of the Holy King Olaf of Norway took place in Trondheim (Norway) on April 2-5, 2020.

The participants of the cross procession, headed by Father Alexander Volohan, Rector of St. Anna Mission in Trondheim, drove through streets and significant sections of the ancient city and offered prayers for the salvation of the residents of Trondheim from the threat of a growing epidemic of the coronavirus.

On April 4, near the ruins of the ancient Sverresborg Castle, a special prayer was read to the “eternal king of Norway” for “the preservation of this city, the country and all those who live in it”.

On April 5, the 5th Sunday of Great Lent, the cross procession was held along the medieval pilgrimage route from Nidaros (the ancient name of Trondheim) to the settlement of Stiklestad, located 100 km from the city of Trondheim at the place of the Holy King’s death in 1030, and back. The participants prayed for the salvation and preservation of Orthodox Christians and all residents of the country and beyond from the harmful contagion.

A prayer service was held at an Orthodox church dedicated to St. Olav in Stiklestad, consecrated in 2014, during which special prayers were offered at the time of the spread of the harmful contagion.

The mass participation in the procession was impossible due to the restrictions imposed by the state during the fight against the pandemic with regard to the number of participants in any gatherings, so the service was broadcast live. This was the first such experience of joint prayer, soon it is planned to make broadcasts of worship services regular.