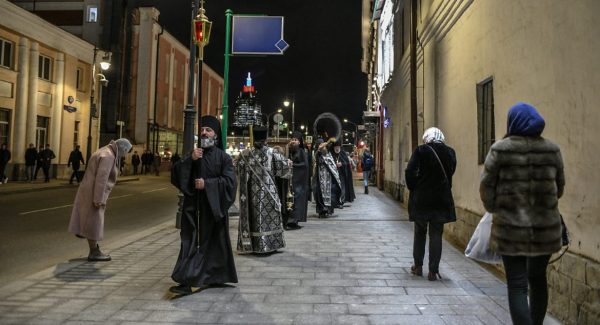 Starting from March 18, the brethren of the Vysoko-Petrovsky Monastery in Moscow began to make religious processions every evening, praying for deliverance from the pandemic of the coronavirus.

During the processions, the monks sprinkle the territory of the monastery and the walls surrounding it with holy water, and also pray to the Lord, the Most Holy Theotokos and St. Peter of Kiev, the Moscow miracle worker, for help to all those in need, reports the monastery’s website.

The first religious procession took place on March 18 after the evening service. The hegumen and several monks walked along the sidewalks surrounding the monastery with the ancient Vlaherna Icon of the Mother of God.

“The tradition of religious processions in days of various disasters was established in the church tradition back in Byzantium. The clergy and believers went around houses, streets, monasteries and even entire settlements, calling on the Lord and saints for help. Today we all need help from above, so the brethren of our monastery unanimously decided to intensify prayer. The Lord will not leave anyone,” said the abbot of the monastery, Hegumen Peter (Eremeev).

It is noted that in the Russian Orthodox Church the tradition of religious processions during the holidays and during trials, by analogy with Byzantium, appeared from the time of the Baptism of Russia in the X century.