Praying With The Heterodox 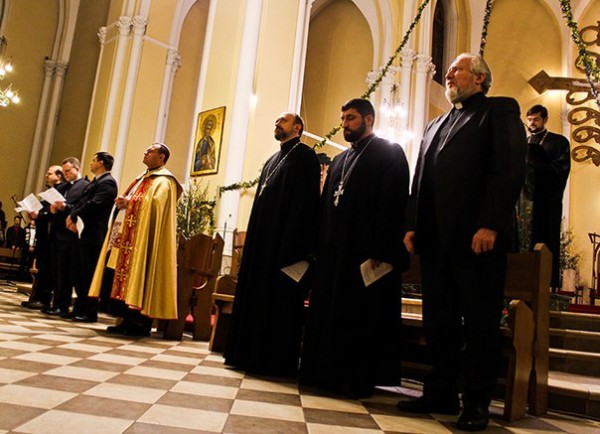 A joint prayer of Orthodox and Catholic Christians in the Cathedral of the Immaculate Conception of the Holy Virgin Mary in Moscow, January, 2016
I received a question from a convert living at home with his heterodox Christian family. He had been advised by a monastic not to pray with heterodox. Obeying this was causing problems at home especially around table grace. Should he say grace before meals with his heterodox Christian mother?
Here is part of my response:
The Church’s relationship with the heterodox is not nearly as monolithic as you seem to think. Keep in mind that a person is not a heretic just because he or she is part of a heretical communion. To be a heretic, one must consciously reject Orthodox teaching. So, for example, although some of Origin’s teaching was determined to be heretical (a couple hundred years after his death), Origin himself is not a heretic because he did not reject the Orthodox faith: he held some heretical opinions in ignorance but in his lifetime he was never corrected by the Church for the teaching. Similarly, St. Isaac the Syrian was a Nestorian bishop, yet St. Isaac is an Orthodox saint. When NATO started bombing Serbia, there was a city-wide prayer meeting (a vespers service) held at the Greek Orthodox Cathedral in Los Angeles and sponsored by the Serbians (a very traditional national Orthodox Church). The Roman Catholic bishop was invited to sit on the front row along with the Armenian, Coptic and Anglican bishops (only Orthodox–all jurisdictions were represented–were at the Altar). And so, to pray for the end of NATO bombing of Serbia, heterodox were invited to join the Orthodox in prayer (but not at the Altar).
If you look closely at the historic situations in which canons were instituted limiting Orthodox interaction with heterodox, you will see that it always has to do with the danger that Orthodox were being seduced by the heterodox. And if you notice how bishops have historically interpreted these canons, you will see that there is great variation. Russian bishops often participated in events and ceremonies in England that involved prayers being offered by Anglican clergy and when Anglican clergy were in Russia, they were invited to participate in events where Orthodox prayers were offered. There was no inter-communion, but a certain amount of praying together was allowed.
What we have in Europe and North America today is unprecedented in Church history. Never before have large numbers of people converted individually (not as whole tribes or nations) to Holy Orthodoxy from heterodox Christian traditions. In the earliest Church, you had people converting from paganism and Judaism, which was different. But even here it is instructive. Notice that in the book of Acts, St. Paul continues to pray at the synagogues. On his last missionary journey, he gets into trouble because he is fulfilling a vow in the Temple at Jerusalem, he is sent to Rome, and the first thing he does there is gather the Jews.
How the True Church has related to those of less-than-true communities has varied throughout history depending on context. That is why we have bishops. It is the responsibility of the bishops (not the abbots of monasteries) to discern how the Church should relate to various heterodox groups. Abbots have a responsibility to their monasteries. Their discernment (Grace) is to guide their monks to holiness. That is as it should be. And certainly, if they think that the bishops have fallen into heresy (which has happened occasionally in history) they should speak up. However, in a matter as pastoral as how converts in the Churches should relate to their heterodox Christian relatives, especially since great variance can be seen in history, I think we should trust our bishops who have been given the Grace to discern such matters. If you were a monk in the monastery, it would be a different matter.
As far as praying over meals is concerned, I think humility is called for. If your mother prays a prayer that is Christian and not heretical, there is no reason why you cannot join her. For example, while it is not Orthodox practice to pray in the name of Jesus instead of in the name of the Father, Son and Holy Spirit, neither is it heretical. But this is a matter that calls for discernment. I do not know your family’s tradition for table grace nor the exact words of the prayer your mother uses. What I am saying is that love, humility and respect should guide you as you think about these things.
Tweet
Donate
Share
Since you are here…