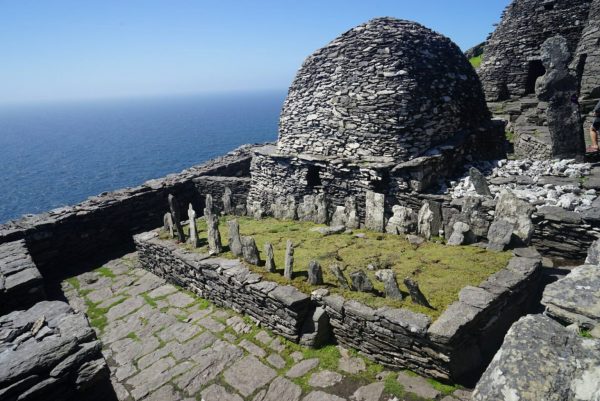 As a follow up to my last post (God Within Us), I offer this ancient prayer. Most people are probably familiar with it, and some may very well use it in their daily prayers. It began to appear in Orthodox books of prayer over the past few decades, reflecting a rediscovery of the Orthodox Church in the ancient West. This prayer is known as “St. Patrick’s Breastplate.” I’ve seen numerous translations. There is one set to music that was popular in the Anglican Church (“I bind unto myself today…”). It was often sung as a processional at ordinations.

St. Patrick’s words reflect his profound Christianization of the British (Celtic) sense of things – particularly the relation between God and nature. This is in no way unique to the Celtic Christians other than in its flavor. Early Christianity represented the conversion of Pagans. C.S. Lewis noted that this was a much easier thing than converting modern post-Christians back to the faith. He wrote:

To say that modern people who have drifted away from Christianity are Pagans is to suggest that a post-Christian man is the same as a pre-Christian man. And that is like thinking … a street where the houses have been knocked down is the same as a field where no house has yet been built. [They do have something in common], namely that neither will keep you dry if it rains. But they are very different in every other respect. Rubble, dust, broken bottles, old bedsteads and stray cats are very different from grass, thyme, clover, buttercups and a lark singing overhead . . .

It seems to me that many Christians in the modern world have themselves lost what we once shared with Pagans, and in doing so, have impoverished the faith. The march of secularism has disenchanted nature, or misenchanted nature (today nature exists as a place inhabited by Mammon). Lewis opined that Europe might need to recover something of Paganism in order to become Christian again. I do not take that as a serious suggestion. However, Lewis’ own project in such works as the Chronicles of Narnia was a “baptism of the imagination” that some have criticized as an effort to “paganize” Christianity. It is worth noting that such critics would (and do) excoriate Orthodox Christianity as a vehicle of paganized Christianity. The truth is quite the opposite.

It looks to me…as though we shall have to set about becoming true Pagans if only as a preliminary to becoming Christians. … For (in a sense) all that Christianity adds to Paganism is the cure. It confirms the old belief that in this universe we are up against Living Power: that there is a real Right and that we have failed to obey it: that existence is beautiful and terrifying. It adds a wonder of which Paganism had not distinctly heard—that the Mighty One has come down to help us, to remove our guilt, to reconcile us.

The disenchanted, secularized Christianity of the modern world, moves about in a world of things, empty and inert. The only “forces” that seem to garner any regard are those mysterious “market forces” that seem to guide the fortunes of the world. The world has become a commodity, measured by its usefulness for business. Of all the religions that have ever existed on the planet, it is perhaps the least attractive in the end. Its collapse will quickly follow (or even precede) the collapse of the present economic system – something likely at some point in the future. The growing number of “nones” represent not the collapse of Christianity, but the inadequacy of secularized Christianity. For those who would point to demographic losses within Orthodoxy as well, I would only suggest that the loss represents a measure of the extent to which even Orthodoxy has become secularized. The various voices that occasionally want to suggest that Orthodoxy’s future is best served by accomodation to modernity have nothing to show for such suggestions. Everywhere such a thing has been tried has only seen the cancer of unbelief and none-belief metasticize.

It is not paganism that Christians need. But we would do well to understand what our pagan ancestors saw in Christianity in the first place. They did not see the world emptied of its powers. Rather, they saw those powers rightly revealed through the Incarnation of the Logos. They did not abolish religious devotion at wells and hilltops or in the groves of England and Wales. The Slavs put away devotion to Perun (their sky god), but did not abandon the Thunder and Lightning and Storms that were once associated with Him. Today (the feast of Elijah), those very forces are recognized in an association with the saint who rode into heaven in a fiery chariot. Such “survivals” do not point to a paganizing of Christianity. They are the Christian fulfilling of every human longing through the ages.

“Heaven and earth are full of Thy glory!” It is right to recognize that glory and name it. Rocks and trees cry out. The whole creation groans. It is time for us to live as participants in creation rather than as its financial managers.

I offer St. Patrick’s hymn as a wonderful Orthodox prayer. May God teach our hearts to pray.

I arise today
Through a mighty strength, the invocation of the Trinity
Through belief in the threeness
Through confession of the Oneness
Towards the creator.

I arise today
Through the strength of the love of Cherubim
In obedience to the Angels,
In the service of the Archangels,
In hope of resurrection to meet with reward,
In prayers of patriarchs,
In predictions of prophets,
In preaching of Apostles,
In faiths of confessors,
In innocence of Holy Virgins,
In deeds of righteous men.

I arise today
Through the strength of heaven:
Light of sun
Brilliance of moon
Splendor of fire
Speed of lightning
Swiftness of wind
Depth of sea
Stability of earth
Firmness of rock.

A summon today all these powers between me and these evils
Against every cruel and merciless power that may oppose my body and my soul,
Against incantations of false prophets,
Against black laws of heathenry,
Against false laws of heretics,
Against craft of idolatry,
Against spells of women and smiths and wizards,
Against every knowledge that endangers man’s body and soul.

I arise today
Through a mighty strength, the invocation of the Trinity,
Through belief in the Thrones,
Through confession of the Oneness
Towards the Creator.