The Pre-Opening of Holy Trinity Monastery and Seminary Museum

Source: ROCOR
Natalya Mihailova | 28 May 2014
On May 18, 2014, the Foundation of Russian History hosted a rededication of the Foundation, and a preview of a new exhibit entitled "The Russian Word and Image: Four Centuries of Books and Art." 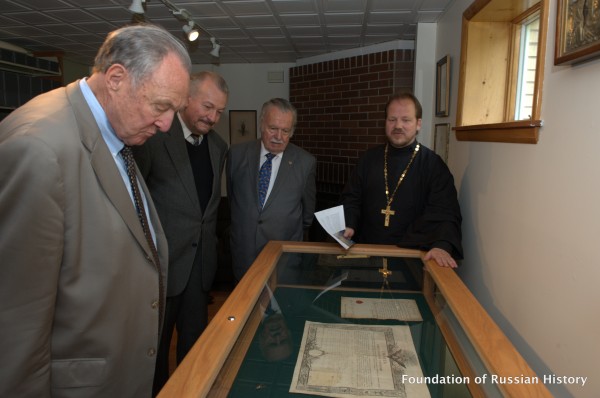 At the event, the Foundation also unveiled the new Russian Nobility Association Reading Room. The museum and reading room are located at Holy Trinity Monastery and Seminary in Jordanville, New York.

Following a Hierarchal Liturgy served by Metropolitan Jonah (Paffhausen), guests assembled in the Holy Trinity Orthodox Seminary Hall to listen to welcoming remarks from Archpriest Vladimir von Tsurikov who has been spearheading the opening of the museum and RNA reading room. Formal remarks were also offered by the President of the Russian Nobility Association, Dr Cyril Geacintov, Igor L Golubovsky, Consul General, and Edward Kasinec from the Harriman Institute at Columbia University and board member of the Foundation of Russian History.

Following the remarks, Archpriest Vladimir von Tsurikov officially opened the museum. Fr Vladimir led the guests through the museum explaining the many artifacts on display. The museum contains manuscript and print materials, archival documents, and three dimensional object d’art. The oldest item on display dates to 1575, other displays include items from the reign of Tsar Michael Feodorovich up until the present day.

The Museum officially opens to the public on May 25, 2014, during Holy Trinity Orthodox Seminary’s graduation weekend. Normal museum hours will be Wednesday through Friday 2-5 pm and Saturday through Sunday 1-4 pm and by advance appointment.

Most viewed articles
Metropolitan Hilarion of Eastern America and New York to Be Buried in Jordanville on May 22176
Patriarch Kirill: The Peoples of Russia and Ukraine Have No Interest in the Conflict166
Communion restored between the Serbian Orthodox Church and the Macedonian Orthodox Church – Ohrid Archbishopric120
Metropolitan Hilarion of Eastern America and New York Reposes in the Lord118
What Do We Celebrate at Mid-Pentecost?103
Celebrating 100 Years with Paschal Joy64
Patriarch of Serbia to Concelebrate with Archbishop Stephen of Ohrid43
Family Life and Spiritual Warfare36
China’s Internet Clampdown Is Step Closer to ‘Cancelling Christianity’17
Concelebration of Divine Liturgy by the Serbian Patriarch and Archbishop of Ohrid in Belgrade (VIDEO)15
Most popular authors
Pravmir.com team638
Ioannis Foundoulis103
Priest Luke A. Veronis64
Archpriest Michael Gillis36
Donna Birrell17