Present and Future of Christians in the Middle East 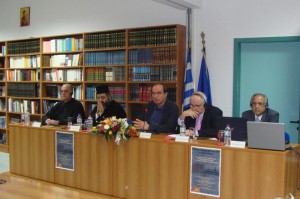 On Saturday, March 30, 2013, the Volos Academy for Theological Studies successfully concluded its roundtable discussion entitled “The Present and Future of Christians in the Middle East in Light of the Recent Developments in the Arab World.” The event, which was held at the “Thessalia” Conference Center in Melissatika, Volos, was part of the Academy’s broader program of events for the current academic year, entitled “Theology in Dialogue.”

The speakers (who came from countries or Christian communities of the Middle East) presented timely perspectives on the ongoing discussion not only about the difficulties facing Christians’ very survival, but also the new challenges posed by the so-called “Arab Spring.”

The roundtable began with introductory remarks by the Director of the Academy for Theological Studies, Dr. Pantelis Kalaitzidis, who moderated the event. Dr. Kalaitzidis began by noting the Volos Academy’s enduring interest in the question of the presence of Christian in the Middle East, highlighting the Academy’s previous events on the topic, especially the major international conference in Volos, organized in conjunction with the World Council on Churches, in June 2011.

The first speaker, Bishop Elia (Toumeh) of Marmarita (Patriarchate of Antioch, Syria), described the dramatic consequences of the ongoing civil war in Syria, which has already last two years, for both Christians and Muslims, while focusing particularly on the difficulties, dangers, and painful dilemmas faced by Christians in Syria. As His Grace emphasized in his remarks, Christian religious leaders are called to correctly interpret the signs of the times, so that, with the help of prayer, they are able to understand coming events. The Orthodox Church, after the difficulties pass, must be able to participate in the new Syrian society that will emerge. That is why all Christians must play a constructive role in the reconciliation of opposing factions. Everyone, he noted, Christians and Muslims alike, fear fanatical Islam, and this is why Islam must demonstrate its respect for minorities and present its plan for the future governance of Syria, providing a positive and peaceful solution to the people demonstrating on the streets. Christians’ role is to remind Muslims that they should not behave with the arrogance of the majority, but according to the logic of patriotism, in which all are equal citizens.

Next, Dr. Hanna Grace, Coptic Christian and Member of the Egyptian Parliament, gave a historical overview of the position of Christians in Egypt during both the Ottoman period and the most recent periods of governance by Nasser, Sadat, and Mubarak, eventually focusing his attention on the treatment of Christians today by the Islamic government authorities in Egypt. Based on the latest developments and the results of the recent referendum, Dr. Grace expressed his belief that the Islamists will ultimately fail to hold onto power in Egypt, due to the growing frustration with their governance, as well as to the more democratic and liberal bloc of voters, as well as the Copts, especially of the younger generation, who increasingly support the secular, non-religious parties and movements with a view to building a pluralistic and democratic Egypt that respects human rights and religious freedoms.

Dr. Antoine Courban, Professor at the Saint-Joseph University of Beirut, and an Orthodox intellectual from Lebanon, then spoke about the hopeful signs that have come out of the upheavals in the Arab world. The speakers stressed that the core of the message that has sent people rushing into the streets is freedom and democracy, dignity and respect for the human person. He also argued that, as Christians, we must recognize Christ himself in the face of every victim of the uprising, regardless of religion or confession. With the revolt, Arabs—both Christians and Muslims—are attempting, albeit very late, to enter into modernity and defend the values of freedom, human dignity, tolerance, diversity, and peaceful coexistence, values that are quintessentially Christian.

The final speaker was Fr. Georges Massouh, Director of the Center for Christian-Muslims Studies at the University of Balamand in Lebanon, who—without neglecting the risk posed by extreme Islamic fundamentalist movements to Christians but also more broadly to all citizens—maintained that the uprisings and revolutions taking place in the Middle East also contain many  promising signs, first and foremost being the people’s thirst for political and religious freedom, democracy, egalitarianism, solidarity, and tolerance of difference. He argued, however, that only a secular—and not religious or theocratic—government can provide a guarantee for the above, while recalling that Christians in the Middle East have always been in favor of secular brand of government and law which bridges the religious divides.

These presentations were followed by a fruitful dialogue and exchange of views with the attendees, and the event concluded with remarks by His Eminence Metropolitan Ignatius of Demetrias, who thanked the speakers for their participation and extremely enlightening suggestions, while also noting the Metropolis of Demetrias’ enduring interest in and support for Christians of the Middle East. He also recalled the important ecclesiastical, theological, and pastoral work carried out within the Patriarchate of Antioch and the fruitful exchanges between Orthodox from Greece and the Orthodox Youth Movement (MJO) in Syria and Lebanon.