Source: Cuban News Agency
Natalya Mihailova | 10 May 2015
HAVANA, Cuba, May 9 (acn) Cuban President Raul Castro invited the Patriarch of the Russian Orthodox Church, Kirill, to visit Cuba, during a cordial meeting on Friday as part of his official program in Russia. 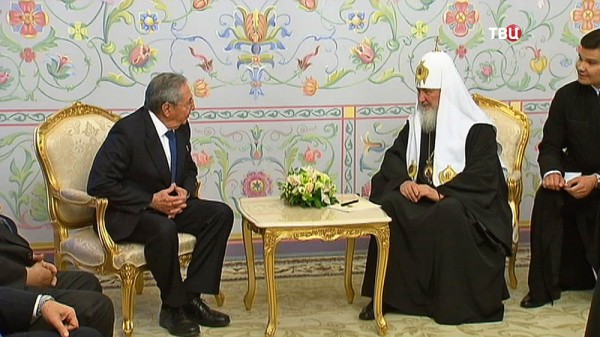 Invited by the Russian head of state, Vladimir Putin, to celebrations for the 70th anniversary of the victory over fascism, the Cuban leader is in Moscow since May 5 and will be on the platform on Saturday, among foreign leaders, during the military parade in Red Square, the Prensa Latina news agency reported on Friday.

He was received by Prime Minister Dmitry Medvedev and held talks with Putin on Thursday at the Kremlin, when the two governmental delegations met to review prospects for joint projects.

It is a great pleasure for me to meet you again, said Raul Castro, recalling the first visit of the now leader of the Russian Orthodox Church.

Kirill, then Metropolitan of Smolensk and Kaliningrad, traveled to Havana in 2008 with the task of laying the foundation of the first orthodox cathedral in the Caribbean island.

During the friendly exchange, the meeting of the Metropolitan with the leader of the Cuban Revolution, Fidel Castro, was recalled.

We would like you to visit us as Patriarch of the Orthodox Church. You can consider these words an invitation, which we will later confirm officially, stressed the Cuban leader.

Kirill thanked Raul for the invitation, noting that in Cuba there are thousands of Russians and Russian speakers, most of them Orthodox believers.

I want, underlined the Patriarch, to express once again my gratitude to Commander Fidel and to you for the decision of building the temple, which “works today for the benefit of Russian-Cuban relations,” considered the Patriarch.

He asserted that Russia and Cuba are united by special, unbreakable ties, and appreciated the friendly bonds between the peoples of the two countries, developed for decades, especially after the triumph of the Cuban Revolution, he said.

“Years pass and we remain friends of Cubans,” highlighted the Russian religious leader.