Source: DECR
Natalya Mihailova | 23 September 2016
Metropolitan Juvenaly of Krutitsy and Kolomna and Metropolitan Hilarion of Volokolamsk, permanent members of the Holy Synod of the Russian Orthodox Church, received awards from the hands of the President of the Russian Federation. The award ceremony took place on September 22, 2016, at the Ekaterininsky Hall in the Kremlin. 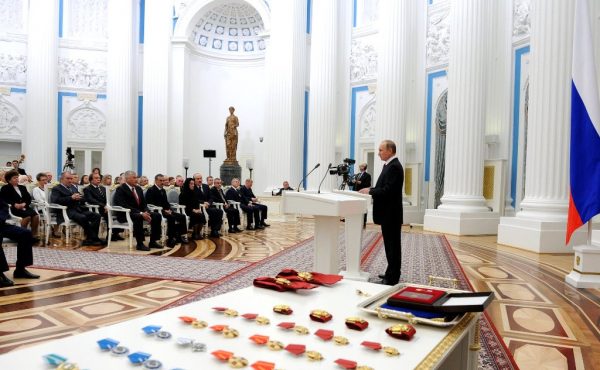 ‘The presentation of state awards is one of the most solemn ceremonies which take place here, in the Moscow Kremlin. It assembles outstanding citizens of our country, distinguished and certainly exceptional people whose achievements have special value for Russia. Each of you in your task has achieved the brightest heights. By your toil and creative work, courage and wisdom you multiply Russia’s glory and pride’,

Vladimir Putin said addressing the soldiers, cosmonauts, cultural workers, religious leaders, educators and people of other walks of life, calling and service, whose efforts and achievements have been marked with high state awards.

The head of the state also stressed that

‘our traditional religions bear a rich experience of service and religious-ethical education. I am sincerely delighted to greet here the esteemed representatives of the Russian clergy – Metropolitan Juvenaly of Krutitsy and Kolomna and Metropolitan Hilarion of Volokolamsk’.

Metropolitan Juvenaly has been awarded the Order for Merit to the Fatherland, 2nd Class. 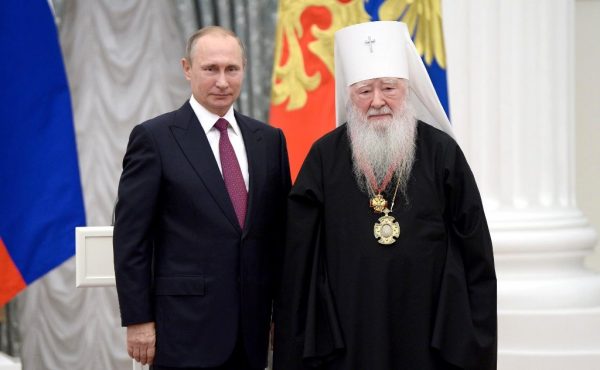 Metropolitan Hilarion of Volokolamsk, head of the Moscow Patriarchate’s department for external church relations, rector of the Ss Cyril and Methodius Institute of Post-Graduate Studies and chairman of the Synodal Biblical-Theological Commission, has been awarded the Order of Honour. 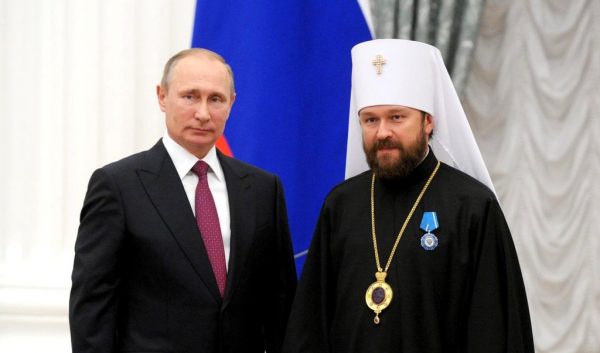 ‘I would like to thank you for the wise and balanced policy towards the traditional confessions of the Russian Federation, which is pursued consistently and purposefully throughout your presidential office’,

His Eminence Hilarion said addressing Vladimir Putin after he was presented with the award,

‘I would also like to use this opportunity to convey to you gratitude from millions of Christians in the Middle East who are subjected to genocide today and do not know whether they have a future and who say whenever we meet them: Please convey to your President that he and Russia are our only hope’.

Photos by the Presidential Press Service