President of Ukraine meets with Primate of Ukrainian Orthodox Church

Source: DECR
Natalya Mihailova | 18 August 2014
Ukraine’s President Petr Poroshenko met with Metropolitan Onufry (Berezovsky) who had been elected Primate of the Ukrainian Orthodox Church on 13 August 2014, the official web-site of the President of Ukraine reported on August 16. 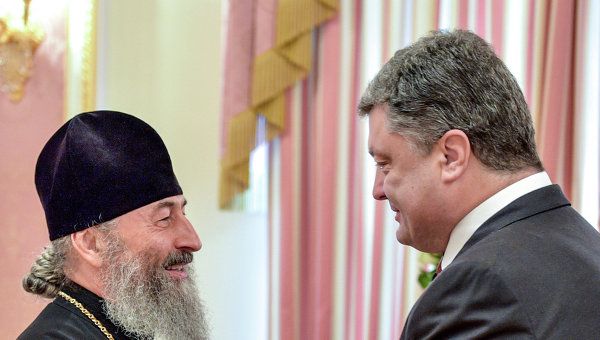 Mr. Poroshenko congratulated Metropolitan Onufry on his election as Primate of the Ukrainian Orthodox Church.

“We pray that the Church withstand and bring peace, mercy, and Christian values to our land. The state and I as its President offer you firm support in your God’s work. My eyes and my heart, as well as my doors will always be open for you,” the President said.

Metropolitan Onufry thanked the head of the state for the congratulations and emphasized that the primary responsibility of the Church today is reconciliation among people. “We accept everyone with love, because we all are God’s children, and that is the main mission of the Church,” the hierarch said.

As Metropolitan Onufry of Kiev and All Ukraine noted, the Church must help those who are suffering today. “We share with people not only their spiritual, but also their material troubles. We share their fate in order to assuage their grief,” he added.

The Church seeks unity, Metropolitan Onufry especially noted. “We must unite in Christ,” the Primate of the Ukrainian Orthodox Church said.