Source: DECR
Natalya Mihailova | 26 February 2016
A press conference on the results of the visit of His Holiness Patriarch Kirill of Moscow and All Russia took place in Moscow on February 24, 2016. The Primate of the Russian Orthodox Church visited the Republic of Cuba, the Republic of Paraguay, the Federative Republic of Brazil, and the Bellingshausen Russian Antarctic Station. The visit lasted from February 11 to 22. 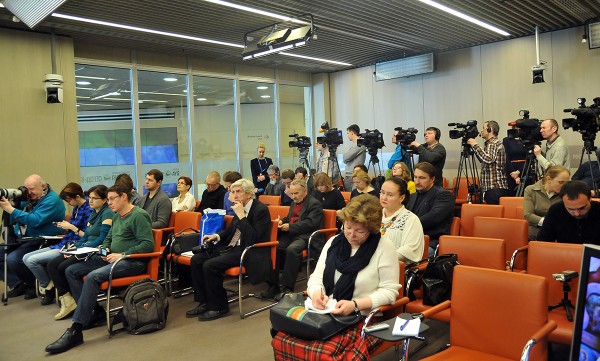 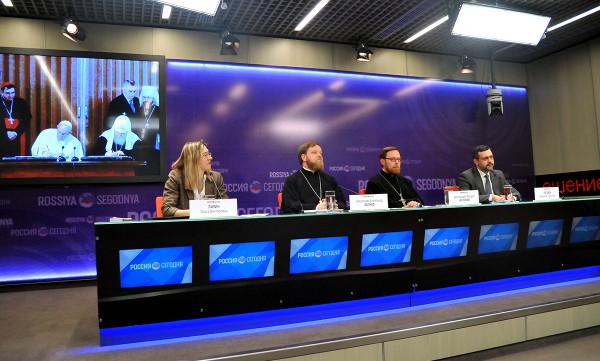 “By the very fact of their meeting in Cuba on February 12 Patriarch Kirill and Pope Francis gave shown the responsible politicians a possibility to rise above disagreements,” Mr. Legoida said and added that Patriarch Kirill and Pope Frances signed a joint declaration in which they called the world community to consolidate efforts in defense of Christians in the Middle East, Africa and other regions. He hopes that this appeal will be heard.

Archimandrite Philaret reminded the journalists that the Orthodox-Catholic Dialogue had been conducted since 1979 and gained enough experience while considering a wide range of problems. He underscored that the meeting of the Patriarch of Moscow and All Russia with the Pope of Rome ‘is outside the framework of the Orthodox-Catholic dialogue as they have different agendas.

Rev. Alexander Volkov expressed opinion that the meeting would help positive development of bilateral relations and of dialogue on the issues raised in the joint declaration.

Mr. Legoida added that the declaration will always be topical and that people will “read and study it.” It was noted during then press conference that one should not for direct connection between the document and concrete actions of certain people.

Rev. Alexander Volkov explained that His Holiness Patriarch Kirill was aware of the concern expressed by some believers of the Russian Orthodox Church over the meeting in Havana. It seems that these people have not grasped the event but have just heard certain things in the mass media.

While answering questions, Archimandrite Philaret noted that different opinions on the meeting, including negative ones, were expressed. “There is nothing new in it, and often enough negative opinions are expressed by the same people. I believe that answers have been given to the most part of questions. The overwhelming majority of the believers of our Church have positive opinion on the meeting and its results, thus determining the development of events. People who really want the truth and seek it have this opportunity, while no arguments will help those who do not want to hear.’

The Church will continue to explain what really took place in Cuba and try to answer all questions of the believers, Archimandrite Philaret noted.

Mr. Legoida added: “I declare with authority that the reaction of the overwhelming majority of the mass media, both the so called traditional and social networks and other ‘new’ mass media, was positive. Indeed, some people were at a loss and asked questions. They receive thorough and qualitative answers.

The reactions of the domestic and foreign mass media to the meeting of Patriarch Kirill and Pope Francis and to the Joint Declaration were 90% positive according to the monitoring, while some 7, 5% were neutral, and maximum 1,5% were critical.

On February 21, the last day of the Patriarch’s visit to Brazil, many believers came to the Cathedral of Ss Peter and Paul in Sao Paolo to attend the Divine Liturgy, Archimandrite Philaret recounted.   “Thousands of people gathered in the huge cathedral to express gratitude to the Russian Church for its actions done for the sake of Syria, Iraq and other countries of the Middle East. Bishops of the Church of Antioch serving in the Latin America and in other places who attended the liturgy thanked His Holiness Kirill for the position of the Russian Orthodox Church” and for humanitarian aid collected and rendered by it and by others in Russia and other countries of the pastoral responsibility of the Moscow Patriarchate. “They also thanked for the word ‘Christianophobia.’ All people know what it means, but it had not been in usage before its introduction by the Russian Orthodox Church.” People’s vivid and sincere response is a visible result of the Russian Church’s actions taken for the defense of Christians in the Middle East.

Father Philaret continued to say that there was another event that has moved his heart, namely a visit to the children’s rehabilitation centre in a Havana suburb. The meeting was longer than meetings with state leaders. Patriarch Kirill greeted and blessed over one hundred children in the centre. Such cordial meetings are very important.

As was reported earlier, participants in this meeting asked the Primate of the Russian Church to send them a priest, and His Holiness promised to meet their request.