Source: ROCOR
Natalya Mihailova | 07 April 2014
On April 4, 2014, the eve of the 5th Saturday of Great Lent, the feast day of the Praise to the Mother of God, after matins, Archimandrite Luke (Murianka), Abbot of Holy Trinity Monastery in Jordanville, NY, tonsured Priest Nicholas Olhovsky to monasticism, who was elected Bishop of Manhattan, with the blessing of His Eminence Metropolitan Hilarion of Eastern America and New York. 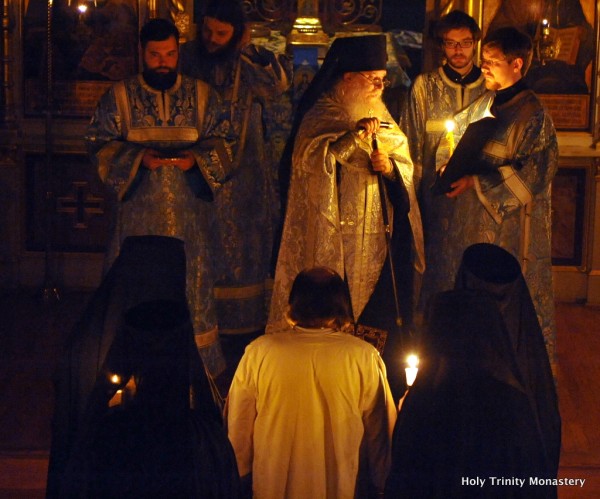 The heavenly patron of Hieromonk Nicholas is St Nicholas (Kasatkin, +1912) of Japan, Equal-to-the-Apostles. Noteworthy is the fact that Fr Nicholas had accompanied the Kursk-Root Icon of the Mother of God “of the Sign” on its historic visit to the Japanese Autonomous Orthodox Church last year.

The following morning, after the monastic midnight office, the newly-tonsured Hieromonk Nicholas led Divine Liturgy along with other clergymen of the monastery and of the Eastern American Diocese.

By decision of the Synod of Bishops of the Russian Orthodox Church Outside of Russia, Fr Nicholas’ consecration to the episcopacy will take place on Sunday, June 29 , during the celebration of the 20th anniversary of the canonization of St John (Maximovich, +1966) of Shanghai and San Francisco, the great hierarch of the Russian diaspora.