Source: DECR
Natalya Mihailova | 14 September 2016
On 10 September 2016, a group of pilgrims from the Voronezh metropolia visited the holy sites in Sofia and met with His Holiness Patriarch Neofit of Bulgaria. 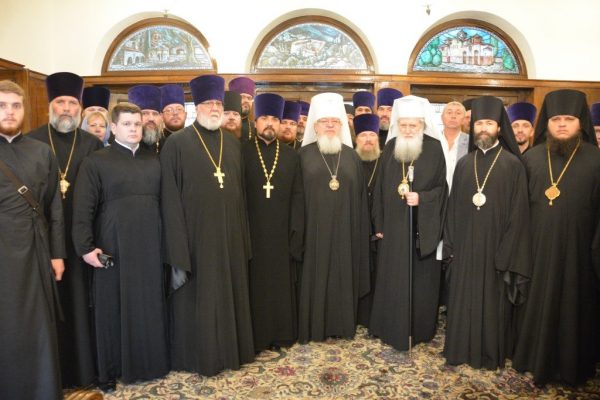 The Primate of the Bulgarian Orthodox Church received at his residence Metropolitan Sergy of Voronezh and Liski, Bishop Andrei of Rossosh and Ostrogozhsk, Bishop Sergy of Borisoglebsk and Buturlinovka, and other pilgrims from the Voronezh metropolia.

The group of pilgrims visited Bulgaria with the blessing of His Holiness Patriarch Kirill of Moscow and All Russia and at the invitation of the Primate of the Bulgarian Orthodox Church to venerate the local shrines, in particular, the holy relics of St Seraphim the Archbishop of Boguchar and Wonderworker of Sofia. Before the Revolution in Russia, St Seraphim served as rector of the Voronezh Theological Seminary. He is considered to be one of the heavenly patrons of the Voronezh metropolia.

During the meeting, Metropolitan Sergy told His Holiness Patriarch Neofit about various activities of the Voronezh metropolia and about the possibilities to organize pilgrimages for local clergy and laypeople to the holy sites of the Bulgarian land.

On September 11, to conclude the pilgrimage, Metropolitan Sergy of Voronezh and Liski celebrated the Divine Liturgy at the Church of St Nicholas – the Representation of the Russian Orthodox Church in Sofia. Concelebrating with him were Bishop Andrei of Rossosh and Ostrogozhsk, Bishop Sergy of Borisoglebsk and Buturlinovka, Archimandrite Philip (Vasiltsev), rector of the Representation, and the clergy of the Voronezh metropolia and of St Nicholas Church.

After the service, Archimandrite Philip warmly greeted the archpastors and clergymen of the Voronezh metropolia. A thanksgiving followed, celebrated at the holy relics of St Seraphim in the crypt of St Nicholas Church, website of the Representation reports.