Primate of Orthodox Church of Alexandria arrives in Russia

Source: DECR
Natalya Mihailova | 21 August 2015
On 19 August 2015, His Beatitude Pope and Patriarch Theodoros II of Alexandria began his pilgrimage to Russia by visiting the Solovki Monastery. The Primate of the Orthodox Church of Alexandia is accompanied on his visit by Bishop Meletios of Naukratis. 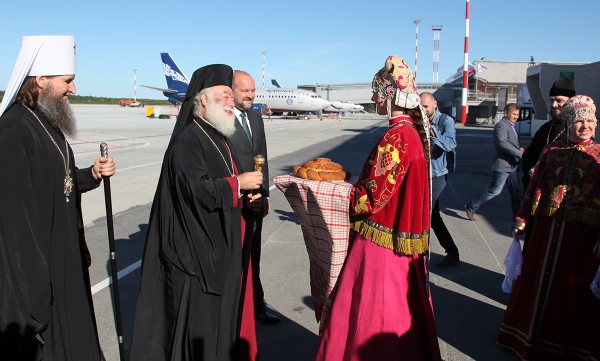 From the airport, His Beatitude Patriarch Theodoros and his suite departed for the Solovki Monastery, where they were met by its abbot, Archimandrite Porfiry (Shutov), and the brethren of the Monastery. In the Church of the Holy Transfiguration, the Patriarch venerated the holy relics of Ss Zosimas, Sabbatius and Herman of Solovki and said a thanksgiving.

Greeting His Beatitude Theodoros, Archimandrite Porfiry noted that the visit of the Primate of the ancient Church of Alexandria was the unique event and a great blessing for the brethren and pilgrims.

Patriarch Theodoros said in response that it had been his long-held dream to come to the Solovki Monastery. “God has heard my prayers, and I am here,” he said. His Beatitude expressed his deep appreciation to His Holiness Patriarch Kirill of Moscow and All Russia for the invitation to visit the Russian Orthodox Church and cordially thanked the abbot, the brethren, and the pilgrims for the warm hospitality.

His Beatitude Patriarch Theodoros saw round the monastery’s churches, learned about the history of the abode, and visited St Andrew Skete on the Zayatsky Island. To mark his visit to Solovki, he planted a fir in the local botanic garden.

Mr. Igor Orlov, Acting Governor of the Arkhangelsk Region, gave a reception in honour of the Patriarch of Alexandria. Among those who attended the reception were members of the delegation of the Orthodox Church of Alexandria; Bishop Savva of Voskresensk; Archpriest Vsevolod Chaplin, chairman of the Synodal Department for Church-Society Relations; Archimandrite Porfiry, abbot of the Solovki Monastery; representatives of the federal and local authorities; and the clergy.

On the commemoration day of Ss Zosimas, Sabbatius and Herman of Solovki, His Beatitude celebrated the All-Night Vigil and the Divine Liturgy at the monastery.

After the service, Archimandrite Porfiry thanked His Beatitude Theodoros for visiting the abode and reminded all the worshippers that the Russian North, including the Solovki Monastery, had been once called the “Northern Thebaid.” However, the abbot noted, the heart of very monk strives after the real Thebaid, the land of the first desert fathers, St Anthony the Great, St Pachomius the Great, and their numerous coworkers. “You have brought a blessing of this true Thebaid to us,” Fr. Porfiry said.

His Beatitude Patriarch Theodoros expressed his profound joy and gratitude to God for an opportunity to celebrate the Divine Liturgy in the holy land of Solovki. “The tears and sweat of the monks living here today remind us of the tears and sweat of those tens of thousands of martyrs who suffered and died here, but did not lose the hope for resurrection. Today the new martyrs are praying to the Lord together with us, and I invoke their prayers, as well as the prayers of the holy fathers of Solovki, on my missionary service on the African continent,” His Beatitude said.

After bidding a warm farewell to the abbot and brethren of the monastery, the Primate of the Orthodox Church of Alexandria departed for Irkutsk.

Photo by the Diocese of Arkhangelsk and Kholmogory