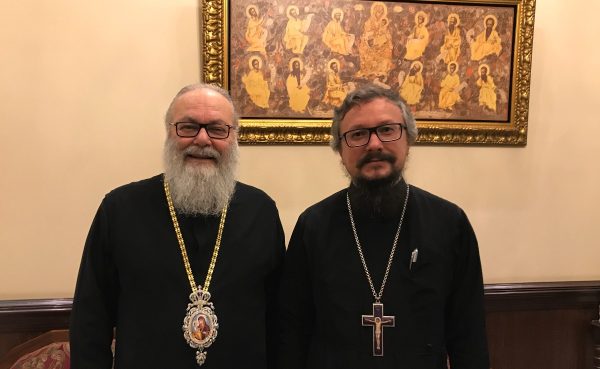 Then His Beatitude John X and Hegumen Arseniy discussed details of further help that could be rendered to the Syrian Orthodox Christians by the Russian Orthodox Church.

They also talked about the cooperation between the two sister Orthodox Churches in church education. His Beatitude expressed deep appreciation to the Russian Orthodox Church and its Primate and to the rector of the Ss Cyril and Methodius Institute of Post Graduate Studies, Metropolitan Hilarion of Volokolamsk, and to the rector of St. Petersburg Theological Academy, Bishop Siluan of Petergof, for giving Syrian students an opportunity to be trained at such authoritative educational institutions of the Russian Orthodox Church. On his part, Father Arseniy expressed the hope that the training of Russian students at the Theological School at the University of Balamand will be continued as well. His Beatitude John X assured him that the door of this higher education school would be always open to Russian Orthodox students and already in the coming academic year the University of Balamand would be ready to enrol two or three students from Russia or other countries in the canonical territory of the Russian Orthodox Church if the epidemiological situation in the Lebanese Republic will be favourable and if the air traffic between Russia and Lebanon will be resumed.

Present at the meeting was also Bishop Ephrem of Seleucia, secretary of the Synod of the Orthodox Church of Antioch.

Metropolitan Onuphry: “Do Not Be afraid of Demons, They Have No Power”

The Lord has power over life, death, and all creation.

On June 24, 2021, the commemoration day of the Holy Princess Olga Equal-to-the-Apostles, Metropolitan Hilarion of Volokolamsk, head…

Three Teenagers Save a Child from a Burning House in Krasnoyarsk

When We Do the Wrong Things…

That we must struggle with our passions is a given. All the…

Metropolitan Onuphry: “Do Not Be afraid…

The Lord has power over life, death, and all creation.

Most viewed articles
Christ Defeats Satan: Healing the Demoniacs113
Unbalanced Fears99
Metropolitan Onuphry: “Do Not Be afraid of Demons, They Have No Power”77
Primates of Local Orthodox Churches Congratulate Metropolitan Hilarion on His 55th Birthday72
When We Do the Wrong Things Habitually29
Most popular authors
Pravmir.com team149
Fr. Theodore Stylianopoulos113
Fr. James Guirguis99
Abbot Tryphon29