Source: DECR
Natalya Mihailova | 25 May 2015
On 24 May 2015, the commemoration day of Ss Cyril and Methodius, Equal-to-the-Apostles and Teachers of the Slavs, the Name day of His Holiness Patriarch Kirill of Moscow and All Russia, and the Day of Slavonic Literature and Culture, His Holiness Patriarch Kirill celebrated the Divine Liturgy at the Cathedral of Christ the Saviour in Moscow. 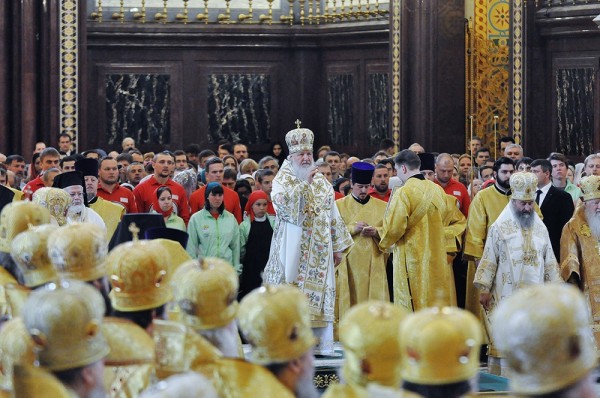 Attending the divine service were representatives of the Local Orthodox Churches to the Moscow Patriarchate, including those of the Orthodox Churches of Alexandria, Jerusalem, Bulgaria, Czech Lands and Slovakia, and America.

Among those attending the service were Mr. Beglov, Presidential Envoy in the Central Federal District; Minister Medinsky of Culture, Mr. Slutsky and Ms Yarovaya of the State Duma; Governor Karlin of the Altai region; Ambassador Boyko Kocev of the Republic of Bulgaria to the Russian Federation.

Praying at the service were also mother-superiors of several convents; volunteers and representatives of the Moscow Orthodox youth.

The service was broadcast live by ‘Soyuz’ TV channel.

At the Little Entrance His Holiness Patriarch Kirill elevated seven archbishops and bishop to the rank of metropolitan.

Special prayers were offered for the Primate of the Russian Orthodox Church who celebrated his Nameday.

His Holiness Patriarch Kirill said a prayer for peace in Ukraine.

A thanksgiving with prayers for His Holiness Patriarch Kirill was celebrated; Metropolitan Juvenaly read a prayer of thanksgiving.

Metropolitan Onufry read out a congratulatory address from the Holy Synod of the Russian Orthodox Church; Mr. Beglov congratulated His Holiness Patriarch Kirill on behalf of President Putin.

Most viewed articles
A Great Time to Join the Orthodox Church280
First Church in the Antiochian Archdiocese Named for St. Xenia of St. Petersburg Prepares for Feast Day127
The Way of Christ Is The Way of Love82
My World’s Different79
Metropolitan Hilarion: the Church and traditional confessions have done everything possible to improve the situation in Kazakhstan74
Brooklyn Street Co-Named for Antiochian Pastor Who Served a Half Century There73
Patriarch Porfirije of the Serbia: Our Position on the Church Issue in Ukraine Has Not Changed50
4-400×6001
1
Most popular authors
Frederica Matthewes-Green280
Pravmir.com team245
Fr. Theodore Stylianopoulos82
Protopresbyter Themistoklis Mourtzanos78
Peter Samore72