Source: DECR
Natalya Mihailova | 09 September 2014
On 7 September 2014, His Holiness Patriarch Kirill of Moscow and All Russia arrived for a one-day visit to the city of Vladimir to lead the celebrations marking the 800th anniversary of the Vladimir diocese. 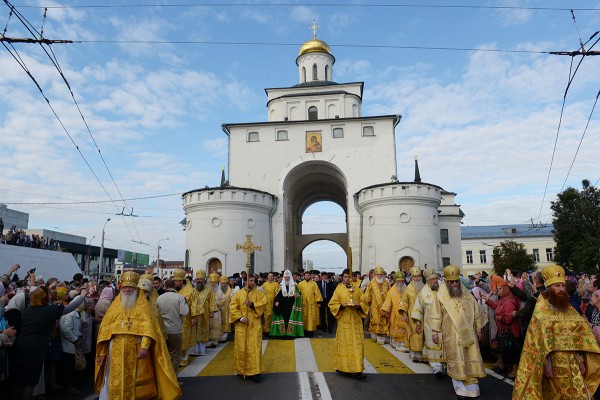 His Holiness Patriarch Kirill led the procession with the cross from the Golden Gate to the Cathedral of the Dormition of the Mother of God. The ringing of church bells accompanied the procession.

At the Cathedral of the Dormition the Primate of the Russian Church celebrated the Divine Liturgy. Concelebrating with His Holiness were Metropolitan Varsonofy of St. Petersburg and Ladoga; Metropolitan Valentin of Orenburg and Saraktash; Metropolitan Yevlogy of Vladimir and Suzdal; Metropolitan Kirill of Yekaterinburg and Verkhoturie; Metropolitan Gavriil of Loveč (Bulgarian Orthodox Church); Archbishop Yevstafy of Alexandrov and Yuryev-Polsky; Bishop Sergiy of Solnechnogorsk; Bishop Innokenty of Nizhny Tagil and Serov; Bishop Alexy of Buzuluk and Sochi; Bishop Nil of Murom and Vyazniki; Bishop Varlaam of Makhachkala and Grozny; Archimandrite Tikhon (Shevkunov), abbot of the Sretensky Stavropegic Monastery, executive secretary of the Patriarchal Council for Culture; Archimandrite Feoktist (Dimitrov), representative of the Bulgarian Patriarch to the Patriarch of Moscow and All Russia; Archimandrite Platon (Igumnov), Professor of the Moscow Theological Academy; and clergy of the Vladimir metropolia. 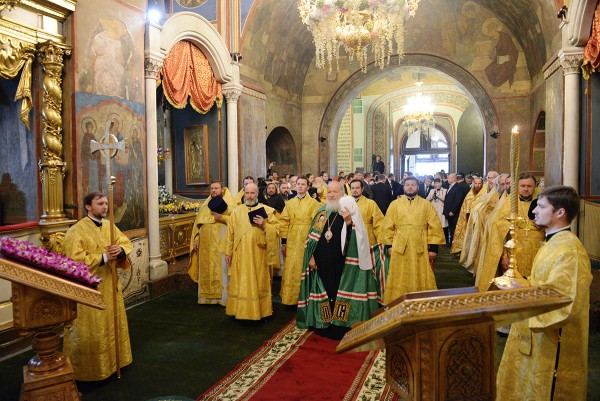 Present at the service were Ms. Svetlana Orlova, Governor of Vladimir Region, and other officials.

After the Litany of Fervent Supplication, His Holiness Patriarch Kirill said a prayer for peace in Ukraine.

After the Liturgy, His Holiness Patriarch Kirill, accompanied by the hierarchs, went out onto a platform placed on the steps of the bell tower at the Cathedral Square. Metropolitan Yevlogy greeted His Holiness and presented him with the tree-part Icon of the Dormition of the Mother of God with the Vladimir saints. Ms. Orlova, Governor of Vladimir Region, also greeted Patriarch Kirill with the jubilee of the diocese.

The Primate of the Russian Church addressed the participants in the celebrations with a primatial homily.

His Holiness Patriarch Kirill thanked Metropolitan Yevlogy for his work and presented him with a panagia and a cross, made on the occasion of the 700th anniversary of the birth of St. Sergius of Radonezh.

The Primate of the Russian Church presented Ms. Sventalna Orlova, Governor of Vladimir Region, with the Order of St. Sergius of Radonezh (2nd class) for her help to the Russian Orthodox Church.

The worshippers received Icons of St Simeon, first Bishop of Vladimir, and of the Holy Prince George of Vladimir.