Source: DECR
Natalya Mihailova | 29 August 2014
On 27 August 2014, at the Patriarchal working residence in Chisty side-street, His Holiness Patriarch Kirill of Moscow and All Russia met with Ms. Dorit Golender, Ambassador Extraordinary and Plenipotentiary of the State of Israel to the Russian Federation. 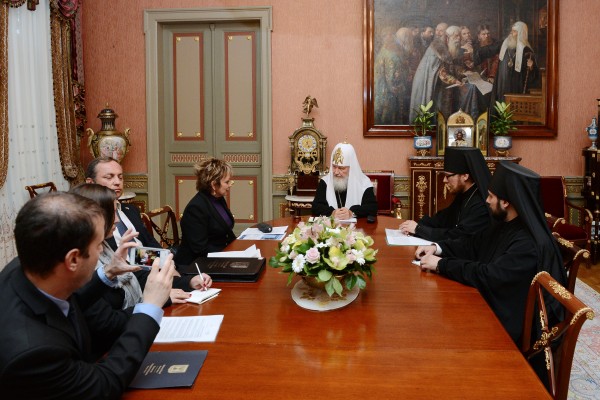 They were joined in the meeting by Mr. Asaf Segev, first secretary of the Israeli Embassy, Ms. Daniela Grudski, first secretary of the Embassy’s Political Department, Mr. Alex Kagalsky, the Embassy’s adviser on media relations, as well as by Archimandrite Philaret (Bulekov), vice-chairman of the Moscow Patriarchate’s Department for External Church Relations, and Hierodeacon Roman (Kiselev), a staff member of the DECR secretariat for far abroad countries.

Ms. Dorit Golender noted with gratitude that she was very pleased with the opportunity to talk to His Holiness Patriarch Kirill of Moscow and All Russia.

During the meeting, the Ambassador of Israel raised, in particular, the issue concerning the situation in the Holy Land at a time of hostilities in the Gaza Strip. It was noted that an unlimited-in-time cease-fire agreement had been reached after fifty days of the conflict.

According to His Holiness Patriarch Kirill’s opinion, the whole society should take part in settling the confrontation and a broad interfaith dialogue is an important factor in maintaining peace.

The participants in the meeting discussed other issues of mutual interest as well.