Prince Charles says he is ‘praying fervently’ for persecuted Christians

Source: Christian today
The Prince of Wales has said that is "heartbreaking" that so many Christians are being persecuted for their faith.
Natalya Mihailova | 18 December 2014 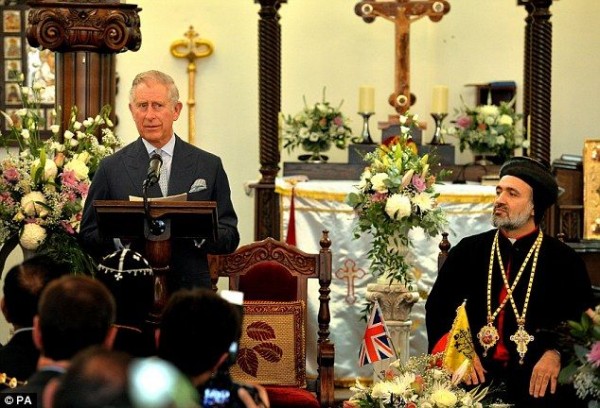 Prince Charles used a visit to London’s Syriac Orthodox Church in Acton yesterday to restate his concern for the Christians of the Middle East and to call for peace. He was welcomed by His Eminence Archbishop Athanasius and the congregation, some of whom were refugees who had fled from the Iraqi city of Mosul and others of whom had family members in Iraq and Syria. The National Anthem was sung in Aramaic, the ancient liturgical language of the Church, for what is thought to be the first time.

The Prince said: “This is the third visit that I have paid in recent weeks to churches whose congregations have the soul-destroying experience of inhuman persecution. In this Advent season, a season of celebration, it is the more profoundly heart-breaking that so many Christians are being persecuted for their faith.

“For more than 20 years I have tried to build bridges between people of different faiths and have appealed for greater understanding, for greater tolerance and for harmony between the great religions of the world. At a time when so little is held sacred, it is quite literally diabolical that these symbolic bridges should be so destroyed.”

He reminded the congregation that Muslims in Iraq and Syria had been the victims of persecution as well as Christians and Yazidis. Prince Charles said: “As I have said before, it seems to me that all faiths to some extent shine a light on the divine image in every human life. If that is so, then surely to destroy another human being is to desecrate the image of the Divine. To do so in the name of faith is, surely, nothing less than a sacrilege.”

He said he had been “deeply distressed” at the scenes of violence and brutality coming from the Middle East and praised media reporters for “helping to ensure that the world is not allowed to forget the stark horror of what is happening in Iraq and Syria; not to forget our brothers and sisters whose faith is, quite literally, under fire; not to forget the unimaginable barbarity to which they have been exposed; not to forget the many, many people who have been savagely murdered or who have died fleeing violence; not to forget those who have lost everything, including their houses; not to forget that countless thousands have had to leave the places in which their families have lived for innumerable generations”.

He expressed deep sympathy for the members of the congregation he had met privately before the service, who had told him of their bereavements and other losses. “The anguish of all this does not bear thinking about, and my heart goes out to you all,” he said.

He added that while at present it would be impossible for them to return, “I do pray most fervently that the situation there will change; that peace will return; that the time will come when you feel it is safe to return to your homeland and that, once there, you will be free, together with those of other religions, to celebrate your faith without any fear of persecution.”

The Prince concluded by quoting Paul’s words in 2 Corinthians 4: 8-12 beginning, “We are afflicted in every way, but not crushed; perplexed but not driven to despair; persecuted, but not forsaken; struck down, but not destroyed.”

Most viewed articles
On Feeling Forsaken142
Patriarch Kirill: We In No Way Question the Healing Power of the Holy Mysteries of Christ!125
Lessons from Saint Mary of Egypt122
Ethiopian Patriarch Thanks Patriarch Kirill For the Support During the Persecution96
Maronite Patriarch Thanks Russian Patriarch for His Support for Christians in the Middle East85
Food for the Journey24
The pandemic is a significant examination for us all, Transylvania Metropolitan says4
Sunday of the Samaritan Woman1
Creation in Genesis1
Athens and Jerusalem: the Role of Philosophy in Faith, with Analysis by St. Gregory Palamas1
Most popular authors
Pravmir.com team337
Archpriest John Moses (+2019)142
Justin Doty122
Dcn. Michael Schlaack24
Aurelian Iftimiu2
Eric Hyde1
Archpriest Geoffrey Korz1